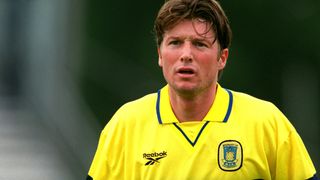 The 1999 Champions League Final was an iconic match; Manchester United’s last-gasp victory over Bayern Munich is remembered around the world. What may be a bit hazy is that the two sides also met in the group stage. And outside of Denmark, it’s unlikely that anyone remembers that Brondby led that group – which also included Barcelona – after the first matchday.

But anyone who saw Allan Ravn’s stunner against Bayern has it etched into their memory. People still stop the 41-year-old in the street. “I think I’ve met everyone who was at the stadium that day!” Ravn laughs.

Like United some eight months later, Brondby left it late against the Germans. An 87th-minute own goal brought the Danes level. Then in the final minute, with the home fans proudly celebrating the draw against the European heavyweights, Ravn chipped the ball over two Bayern defenders and charged towards goal.

“I didn’t have enough energy to take the last man as well,” he recalls. “So either I needed to make one more dribble, which probably wouldn’t have gone that well, or take the shot. I saw Oliver Kahn was a bit outside the goal and I wanted to pass it over him.”

From just outside the box, the midfielder looped the ball into the top corner. The scoreboard read 2-1 and the local fans lost it. “It was like some kind of explosion,” says Ravn. “The sound was amazing.”

Ravn rates the goal, in the club’s first Champions League group match, as “absolutely” his career highlight. Sadly, the 10-time Danish champions lost their next five and haven’t made the group stage since.

This feature originally appeared in the February 2012 issue of FourFourTwo magazine. Subscribe!