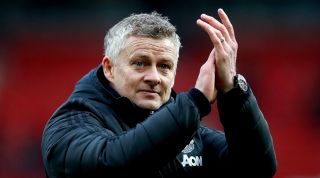 An awful January, when Manchester United appeared jaded and lost four games, has been followed by a far better February. United have played six games since that abomination at home to Burnley on January 22. Four wins, two draws. Thirteen goals have been scored and only one conceded with an impressive five clean sheets including at Manchester City and Chelsea away.

Do I have any conviction that United have turned a corner and the team will rise up the table? No, not yet. We’ve been here before several times this season where I’ve thought United were on a smoother course. Then they lost at home to Crystal Palace. Or Newcastle. Or Bournemouth. Or at a Watford who’d won one of their 17 league games.

United have been unable to win three consecutive league games so far this season and have only managed consecutive wins twice before Sunday’s 3-0 triumph against Watford. If United beat Everton away on Sunday and it’ll be the first time in a year that the team have won three league games on the bounce. If.

Conversely, just as United have looked at their most desperate with criticism of the Glazers, Ed Woodward or Ole Gunnar Solskjaer building, the team have picked up unexpected results. A draw against Liverpool (yes, we're at the level where a home draw against Liverpool is welcomed), a home win against Spurs followed by the epic first half performance at City, and then that win at Chelsea a week ago. That was a huge result.

Even the majority of fans who have faith in Solskjaer’s rebuild have doubts and minimum requirements must be met. They’re not set in stone nor contract, but you know it at matches when it isn’t good enough. Nine wins from 25 games, as was the case before Stamford Bridge, was falling way short of the minimum. That’s when you start to see #OleOut hashtags, though fans have continued to sing his name at games. It’s when you see protest talk pick up traction online, though that doesn’t translate well into real life at games.

Fans are right to be circumspect, though. This poor season could still end brightly, but what would constitute a success this season for Solskjaer and MUFC?

A top four finish, for one. United haven’t been alone in their failings this season. Chelsea had won one in six before they beat Spurs – that’s a Spurs who are behind MUFC. Arsenal have won only eight league games this season – that’s Arsenal who are four points behind MUFC. Champions League qualification is needed for United’s bottom line and will help attract players in the summer.

Or a trophy or two. Having overcome a tough third round away at Wolves, United are still in the FA Cup with a winnable game at Derby in the fifth round where the atmosphere will be louder than anything Derby have heard all season.

Despite an unconvincing display in awful conditions in Bruges, United hold the advantage in the Europa League second leg. The competition is a tough one, but it’s well worth winning. It’s not like this United side is strong enough to win the Champions League, is it?

What Solskjaer cannot afford to happen is a fade out into nothingness, as things did a year ago on his watch and the previous season under Jose Mourinho. Solskjaer has claimed that his players are fitter now and they don’t have the upheaval which came with a change of manager last term. They need to show it. The training trip to the hills outside Marbella was seen as a success and players needed that break. Several like Harry Maguire, who has played more than anyone, looked exhausted. Now they looked refreshed and up for it.

Not everyone. Jesse Lingard and Andreas Pereira were dropped for the Watford game. That happens when you don’t play well and the stock of both is on the floor with fans. Only playing well can change that, but Lingard’s had more chances than he could have expected over the years. He hasn’t contributed enough to the team for a long time. If Mino Raiola wants to move him to Italy like other players who’ve not been performing, there will be no protests for him to stay. Dan James looks like he’s played too many games, but Solskjaer’s signing have generally improved the team. He’s not squandering budgets on players that have to be moved on. He’s shown evidence that he can get it right with time, support and more transfer windows. He’s dispensed with those who were a negative influence in the dressing room or who were contributing little. He’ll continue to do that and he’s no fool when it comes to Paul Pogba’s situation, but he can’t force a player to play either.

Sunday’s game against Watford could have easily been one that tripped United up. It looked like that could happen in the first half as United struggled to break down a 4-1-4-1 and Watford created chances and their full-backs got forward, but however wobbly United’s defence looks, it’s keeping clean sheets. Luke Shaw and Maguire have been impressive in the last week. In Bruges, Shaw sprinted over half the length of the pitch to dispossess Bruges’ fastest player.

Watford went to plan once Bruno Fernandes had won and scored a penalty for his first MUFC goal. There were other nice touches at the Watford game – Solskjaer meeting local pensioners on the pitch to raise awareness of loneliness in old age, the flags and silence for Harry Gregg.

Fernandes assisted the other two goals too. He was confident and looks a quality addition. He’s the best thing about United right now, a player who has settled immediately, something so many have failed to do at United. Anthony Martial keeps starting games looking like he’d rather be having his teeth pulled out…then scores a great goal. Three times that has happened in the last week.

Mason Greenwood scored his eleventh goal of the season with a superb finish. No player under 19 has scored as many goals as Greenwood. Note the ‘under’ as Erling Haaland, at 19, is the best teen striker in the world right now. I’d love to see Haaland at Old Trafford. However, equally I wouldn’t love to see the team sign players over whom they have little control.

United’s glass was half empty a month ago, but it’s starting to fill and having Scott McTominay back will help. He’s needed. The next four league games are at Everton, scene of United’s worst performance last season. Then it’s home to Manchester City, where United have a dreadful recent record, a first ever visit to Spurs new ground and a game against Mourinho, and another home tie against league rivals Sheffield United before a match at Brighton, where United have also been terrible in recent years. So, to return to my caution that United are now on course, those are the games that can sink the mood among fans who’ve been patient. And it would be just when spirits are starting to lift as we move towards spring.