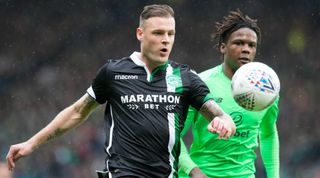 Stokes, formerly of Hibernian and Celtic, was a free agent and had been training with St Mirren under his old manager Alan Stubbs, but now he's decided Iranian football is the thing for him. Most recently he spent an unsuccessful short spell with Greek side Apollon Smyrni.

The 29-year-old had reportedly been offered a short-term contract to play for the Buddies, but instead he has opted for a more lucrative deal to play in the Middle East under Toshack. The ex-Real Madrid manager took the Tractor Sazi job in early June.

English midfielder Harry Forrester also made the surprise switch to join Toshack in Iran on Thursday - just a day after being released by Rangers. With it, the 27-year-old becomes the first Englishman to sign for an Iranian club since 2015, following in the footsteps of Hackney's Korede Aiyegbusi, who joined Meshki Pooshan.

Boyhood dreams fulfilled for both players, FFT can only assume.