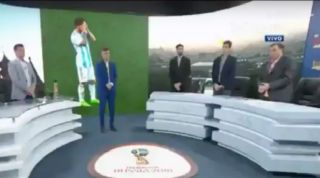 Willy Caballero's calamitous blunder in the 53rd minute gifted Ante Rebic with Croatia's opener and set the tone for a disastrous 3-0 Argentina defeat.

The two-time holders are on the brink of being knocked out at the group stage for the first time since 2002, although Nigeria's victory over Iceland has blown Group D wide open and means victory over the Super Eagles in their final match could take them through.

Luka Modric and Ivan Rakitic both scored in Croatia's convincing display, and added to Argentina's woes as Diego Maradona broke into tears in the stands.

After the game, TyC Sports' studio host and guests were so disappointed with the Albiceleste's dire performance that they made the decision to hold a minute's silence.

Imagine Mark Pougatch getting Roy Keane to agree to this.

Argentina will attempt to rescue their World Cup campaign against Nigeria on Tuesday.

Switzerland fans travel 1,240 miles to the World Cup... in a tractor