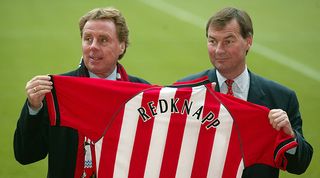 The Premier League has thrown up plenty of surprises down the years, not least when it comes to some of its weird and not-so-wonderful managerial hirings.

Desperate times may have called for desperate measures, but for every masterstroke – like the appointment of Mauricio Pochettino at Southampton, for example – there are plenty of less successful tales to tell...

The Bald Eagle swooped into Selhurst Park from Juventus in summer 1997 after Palace’s promotion back to the Premier League – a surprise in itself. He wasted little time in making an impact too, scoring on his debut and helping the south Londoners make a bright start to life back in the top flight.

Though injury curtailed Lombardo’s influence on the pitch in the months that followed, the Italian was a cut above his Palace team-mates when he did get on the pitch. So much so, in fact, that by late February incoming new owner Mark Goldberg hit upon a novel idea.

With Palace bottom of the table following a 6-2 thrashing by Gianluca Vialli’s Chelsea, Goldberg decided to take a leaf out of the Blues’ book by hiring a 32-year-old Lombardo as their player-manager. In a further twist, an increasingly bloated Tomas Brolin was brought in as Lombardo’s assistant and translator. Though the Italian steered Palace to a win over Newcastle during his second game in charge, scoring once again, he couldn’t arrest their slide and the Eagles’ relegation was confirmed by late April. Lombardo stepped down as manager but stayed on as a player, eventually leaving for Lazio the following season.

Jefferies made a shock move south of the border in November 2000, replacing Chris Hutchings at a Bradford side already staring down the barrel of a Premier League relegation. On the face of it, the 50-year-old Scot appeared ill-equipped for the demands of England's top flight. Though he’d carved out a respectable 17-year career in Scotland that included a Scottish Cup success with Hearts in 1998, he’d never managed in England before, let alone the Premier League.

The Scot also struggled to manage the sizeable egos of players like Benito Carbone and Stan Collymore, with the latter dubbing him “one of the most useless managers I worked under”. Bradford were relegated, and Jefferies departed after a poor start the following season.

Explained: UEFA’s new Europa Conference League competition will absolutely not get you excited

Despite Chris Hughton having guided Newcastle back to the Premier League in his first season, the affable gaffer was given his marching orders in early December 2010 – when the Magpies were 11th in the Premier League table. A club statement cited a desire to hire someone "with more managerial experience", but fans were up in arms a few days later when Alan Pardew – whose last job had been with Southampton in League One – was hired on a five-and-a-half-year contract.

Though Newcastle ultimately finished Pardew’s first season in 12th - one place lower than they'd been under Hughton - the 2011/12 campaign brought considerable success as Newcastle finished fifth and Pardew landed the Manager of the Year Award (plus an inexplicable eight-year contract). The Toon made it all the way to the quarter-finals of the Europa League the following season, but a general malaise began to seep in.

Pards eventually departed for Crystal Palace in December 2014, with few on Tyneside mourning his departure.

Nigel Adkins had overseen two-and-a-half years of great success at Southampton, taking them from League One to the Premier League in back-to-back campaigns. But with the Saints three points clear of the drop zone in January 2013, the club decided to bring in former Espanyol manager Mauricio Pochettino – a move chairman Nicola Cortese said had been made “with the long-term ambitions of Southampton Football Club in mind”.

Well, quite a bit as it turned out. After guiding Southampton to a comfortable mid-table finish, the south-coasters finished eighth in his first full season with their highest points tally since 1992/93. Tottenham swooped soon after, swapping Tim Sherwood for Pochettino; a bit like you might a Kinder Surprise for a Fabergé egg.

Plenty of eyebrows were raised when former Norway coach Olsen agreed to step in for the absent Joe Kinnear as Wimbledon manager in the summer of 1999. While Olsen had performed minor miracles in getting a technically limited Norway side to two successive World Cups in 1994 and 1998, his club management experience was limited to Scandinavia; most recently with Valerenga. It proved to be a match made in Premier League hell.

A keen advocate of sports science, Olsen was soon dubbed the “mad professor” by England's press thanks to his penchant for dull long-ball tactics and an intricate zonal marking system he steadfastly refused to deviate from.

He not only struggled to control the partying antics of Wimbledon’s famous Crazy Gang but also failed to properly impart his complex defensive instructions, culminating in a run where the Dons picked up just one point from 11 league games. A defeat to relegation rivals Bradford proved the final straw: Olsen was dispatched with two weeks of the season left, and Wimbledon were relegated.

QUIZ! Can you name the 50 youngest ever Premier League managers?

A shock replacement for Francesco Guidolin, who was sacked just seven games into the season, Bradley beat Ryan Giggs to the Swansea job in October 2016 after impressing in his interview. Though the American had fared well managing the US national team and in particularly trying circumstances with Egypt, he came to the Liberty Stadium from lowly Ligue 2 outfit Le Havre. Perhaps understandably, some theorised that he landed the gig after impressing Swansea’s American majority shareholders.

Sadly for Bradley, his face just didn't fit. Describing a penalty as a ‘PK’ and away fixtures as ‘road games’ prompted plenty of chuckles among fans, and ultimately he struggled to communicate his ideas to the struggling Swans players. It didn’t help that Bradley was constantly changing his team and tactics, resulting in a haul of just eight points from the next 33 available.

A 4-1 defeat at home to West Ham on Boxing Day was the final straw, with many players revolting against Bradley’s approach. Twenty-four hours later, he was gone. "It was difficult because the manager drove the team mad," ex-striker Borja Baston later reflected. "He made lots of changes and we didn't know what we were trying to do."

"I am sure there are a lot of Burnley fans asking: 'Why Brian Laws?'” read the opening line of Laws’ first official statement as Burnley manager. He had a point.

Sacked by Sheffield Wednesday just a month earlier, Laws was suddenly replacing Owen Coyle – the man who had ended the Clarets' 33-year stint away from the top flight – as manager of a Premier League club. Burnley had started well too, with wins over Everton and Manchester United making fans feel more optimistic about their chances of survival.

Laws, who only landed the job after Doncaster Rovers had refused to let Sean O’Driscoll take up the position, would soon change that. Burnley never came close to replicating the doggedly impressive form they enjoyed under Coyle, went on to win just three more games in the league and were relegated with two games to spare. Laws lumbered on, eventually relieved of his duties in December of the following season... much to the relief of Burnley fans everywhere.

When former Thailand Prime Minister Thaksin Shinawatra purchased a controlling stake in Manchester City, he did so with one goal in mind: to make it the biggest football club in the world. To do that, he needed the world’s biggest manager and duly plumped for Eriksson, fresh from his most recent job in charge of England. The Swede agreed to take the helm on the proviso that City spent big in the transfer window. Shinawatra agreed, splurging around £30 million on eight new players in the summer that Sven arrived.

Things started well, too: City won their first three games, including a victory over Manchester United. By early December they were third and just four points off the top. But then the wheels came off.

The Blues went on to win just five more league games, though they did at least beat United again to claim a first double over their local rivals in 38 years. The final nail in Sven’s coffin came with an 8-1 defeat to Middlesbrough, with many of City’s players seemingly downing tools amid rumours that Shinawatra was set to sack their Swedish gaffer. A few weeks later he did exactly that.

EXCLUSIVE Harry Redknapp: I regret leaving Portsmouth for Southampton in 2004

Just a few short weeks after resigning as Portsmouth manager following a disagreement with chairman Milan Mandaric, Redknapp stunned fans on the south coast by taking the reins of local rivals Southampton. The Saints were in dire straits but Redknapp appeared confident of keeping them up, boasting: "I've never been relegated from the Premier League and I don't intend to start now."

Things got off to a bad start, however, when he was forced to sell star striker James Beattie to Everton just a few days later. Redknapp didn’t exactly endear himself to fans with the players he brought in either, namely serial relegation battler Nigel Quashie and his injury-plagued son Jamie Redknapp.

Results on the pitch were patchy – a 4-1 loss to Portsmouth the undoubted low point – but it did go to the wire. Southampton went into the final day needing a victory at home to Manchester United, and even took the lead early on. It didn’t last, though, and United eventually claimed a 2-1 win that ended Southampton’s 27-year-stay in the top flight.

Redknapp departed early in the following season after struggling to mount a promotion challenge with the Saints, returning to Portsmouth, who welcomed him back with open arms following the sacking of Alain Perrin. Redknapp hailed Fratton Park as his “spiritual home”, rubbing salt into the wounds of furious Saints fans.

Di Canio was the surprise choice to replace Martin O’Neill at the Stadium of Light in late March 2013. Though he’d successfully guided Swindon to League One in his first managerial post, the Italian had never managed in the Premier League, or even the Championship. He also came with significant baggage: namely his fiery, outspoken attitude and some decidedly dodgy political leanings that prompted club vice-chairman David Miliband to resign from his post.

Di Canio quickly set about instilling strict discipline among the Sunderland ranks. Training was intensified, while luxuries like ketchup and mayonnaise were banned from the club. It seemed to do the trick, anyway, as the Black Cats claimed eight points from their final seven games to avoid relegation – including a 3-0 victory over Newcastle at St James’ Park that featured some particularly animated celebrations from Di Canio.

The Italian’s authoritarian stance soon began to rub players up the wrong way, though, and after Sunderland picked up just a point from their first five games of the following season, it was arriva derci for Paolo.