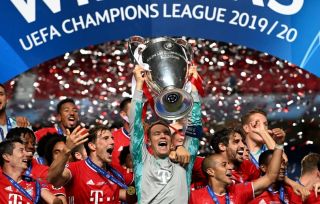 In February, RB Leipzig left the Allianz Arena with a point. A 0-0 draw that was interpreted in the context of the Bundesliga title race assumes a different significance now.

Six months later, it remains the only time Bayern Munich have not won in 2020. They have won the Bundesliga, the German Cup and now the Champions League. They have won 21 games in a row – 29 in 30 going back further – and the first team ever to win 11 consecutive Champions League games have translated their dominance from domestic to European football.

For the second successive season, the final may be remembered less than a spectacular scoreline that preceded it. For Liverpool 4 Barcelona 0, read Bayern 8 Barcelona 2. That was the statement that reverberated around Europe. Beating Paris Saint-Germain could be framed in the context of Germanic versus state-sponsored ownership. Or perhaps it merely served as a reward for team-building, rather than bolting on superstars to create a frontloaded side. It is a moot point if PSG have the more feared forward line, but Bayern have the better midfield and defence.

Their starting 11 in Lisbon was acquired for around £125 million; less than Kylian Mbappe, let alone Neymar. Perhaps it was poetic justice that Kingsley Coman, the Parisian who would not have enough stardust to figure in the modern-day PSG forward line, delivered the winner. Perhaps, with Leroy Sané already signed, ‘Coman the Bavarian’ is destined to be Bayern’s new version of Jupp Heynckes, the Champions League winner immediately sidelined by an upgrade.

But, despite Robert Lewandowski’s 55 goals this season, there was something appropriate about a squad player proving decisive.

While others of the superpowers are paying the price for poor decisions, Bayern have assembled Europe’s deepest pool of quality players. There was something magnificently surreal about Eric Maxim Choupo-Moting turning a Champions League quarter-final PSG’s way, but Bayern spread their budget, capitalised on others’ errors in recruitment – think of Philippe Coutinho embarrassing Barcelona in his cameo – and showed a sure touch. So did Hansi Flick: the one change he made for the final was to bring in Coman, and it was an indication of the alchemy of a manager who has shown a golden touch since replacing Niko Kovac. Bayern have lost European Cup finals to mid-season appointments, in Aston Villa's Tony Barton and Chelsea's Roberto Di Matteo, but Flick looks to have more staying power than either.

The club constructed the squad. He harnessed its power, finessing the blend of old and new, combining the survivors of the 2013 triumph with Alphonso Davies, who was 12 then. Flick’s early decision to recall Thomas Muller, one of the great footballing brains of his generation, was a masterstroke; so, too, unleashing Davies at left-back.

COMMENT Forget Jadon Sancho and Erling Haaland: Alphonso Davies is the most exciting talent in the Bundesliga

The string of saves a renascent Manuel Neuer produced in the final made him a re-entry in the conversations about the world’s best goalkeepers. The winner was fashioned by Joshua Kimmich, who has reverted to being the new Philipp Lahm after doing a decent impression of Lothar Matthaus for much of the season, and whose deft chip brought him a 15th assist of the campaign. That can-do approach is instructive: so, too, an adaptability. David Alaba won the Champions League as a centre-back and, a few years ago, that felt the sort of thing only Pep Guardiola might imagine. So, too, the daringly high defensive line Flick used in previous rounds.

EXCLUSIVE Joshua Kimmich interview: 'Liverpool were just stronger than us in the Champions League last year. It has hurt since 2013'

That Niklas Sule, Lucas Hernandez and Benjamin Pavard – each, among other things, a high-class centre-back – started the final among the substitutes points to the strength in depth. Defending champions have a tendency to start the next season as favourites, and while Real Madrid are the only team to have retained the Champions League in three decades and Thiago Alcantara’s future is one cause for concern for Bayern, they merit that billing.

It is the product of a near-perfect year.