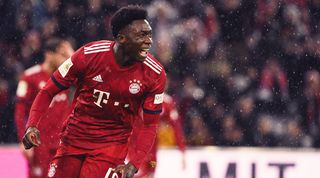 You can’t be called Alphonso Davies and not be destined for something exciting in life, can you? It’s the kind of collection of syllables that average Joes search for in phone books for stage names; it rolls off the tongue like the lead character in a slightly pretentious indie film. Unusual without sounding made up. Cool without being too cool.

If your introduction to this particular Alphonso Davies was the Champions League first leg for Bayern Munich against Chelsea before the COVID-19 break, you witnessed a mesmerising performance. Since the Bundesliga’s been re-lit, Alphonso has only been thrown into sharper focus: it’s two goals in his last three appearances and the world are sitting up to take note.

Everything that you’d completely imagine a kid called Alphonso Davies to be, he is. The first MLS player born this century; a North American with quicksilver pace, now turning out for one of Europe’s aristocracy. But it’s not always been this easy to be Alphonso Davies.

ALSO READ Best left-backs in the world: the top 10, ranked

Davies’s parents were from Liberia, home of the Ballon d’Or’s only African recipient, George Weah. In 1999, rebel groups invaded Liberia from neighbouring Guinea, with Guinea helping to arm and finance these groups. This displaced almost half a million Liberians, seeking to escape the conflict: including Davies’s parents.

And so Alphonso was born in 2000, in Buduburam, a refugee camp in the Gomoa East District of Ghana. It is, unfortunately, a very 21st Century start in life. It only adds fuel to the fire of his story.

Davies is an underdog. He’s raw. He still makes a lot of mistakes. A cliche has already begun to form: some say that because he’s so quick - like Roadrunner, Thomas Muller joked - he doesn’t need to ever be in the right position.

It’s very un-German, that - Die Mannschaft have perfected positional mastery since the days of Beckenbauer. The German way does not favour underdogs: it favours studious footballers who know exactly where they need to be at whichever instant.

And really, the one place you will never find an underdog is at the Allianz Arena. This is a squad comprised of the cream of German football. It’s difficult enough to be a talent at a big club, let alone a talent at a big club who hoovers up the talents of all the small clubs. Gnabry, Neuer, Kimmich, Pavard, Sule, Goretzka and most notably Lewandowski have all played for Bayern’s rivals. The club is currently courting Timo Werner and Kai Havertz: it’s “If you can’t beat them, join them” in action. Borussia Dortmund just cannot compete with that.

Look at Jadon Sancho. Admirably, the story goes, he turned his back on the riches of the Premier League for Bundesliga game-time; soon enough, he filled the void that Ousmane Dembele had left at Signal Iduna Park. OK, he’s probably not Bayern-bound, but that’s partly because he’s English (we expect the romance will bring him back here) and partly because he’s outgrowing the league by the week.

Erling Haaland is now doing the same. Thorgan Hazard too, Gio Reyna likely has eyes towards being better than Pulisic. Julian Brandt is a little older, but don’t be fooled that this isn’t a stepping stone for him, too.

Alphonso Davies is in a bracket with the bright bunch at BVB, Bayer Leverkusen’s Havertz and RB Leipzig’s Werner. The Bundesliga may not be what it was. For the majority of clubs, such wonderkids on their books are there to be nurtured; watered like acacias for the bigger boys of Europe to pluck when ready.

Bayern are different though. Bayern are pluckers, not pluckees. Davies is different, too. This is a 19-year-old kid who is tearing up the league - from left-back of all places. Bayern signed the last left-back to win the World Cup - smashing their transfer record for him - and are using their other left-back, who happens to be David Alaba, in the centre of defence. That’s how good Alphonso Davies has been. And he’s not even a left-back. He’s arguably Canada’s greatest ever footballer already, and he’s barely old enough to drive.

Sure, other players have been impressive this season, or any other season in the past few years. But walking into the best side in the league at 19 amid chaos, silencing all opposing players and looking this good within six months? Yeah, Alphonso Davies is that good. Just look at Phillip Lahm, Joshua Kimmich or David Alaba. If he stays where he is - which he probably will, given that he’s employed by the predators rather than the prey - who knows what kind of full-back he could become?

It could only be a kid called Alphonso Davies. Jadon Sancho and Erling Haaland are spectacular talents. They can hold you in the palm of their hands when they’re in full throttle; Havertz and Werner are special too. But Davies: he could truly be a once-in-a-generation footballer. Let’s face it: he’s already the reason most of us watch Bayern right now.