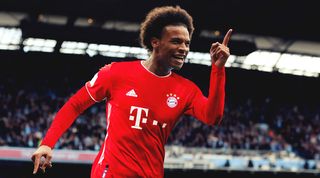 Bayern Munich have made no secret of their desire to sign Germany’s best young players. In recent years, they’ve developed a reputation for cherry-picking the most exciting talents from rival Bundesliga clubs, often for minimal fees.

Leon Goretzka, Joshua Kimmich and Serge Gnabry, for instance - stars in the current Bayern squad, all German and all still 25 years old or younger - were signed for a combined €16.5m; daylight robbery in today’s market.

While he didn't come cheap, they’ve now got their hands on Leroy Sané; a colossal talent that slipped through their fingers when he opted to join Manchester City from Schalke in 2016. At 24-years-old, and with four years with Pep Guardiola under his belt, he’s no longer just an exciting youngster, but a player capable of consistently operating at a world-class level.

While Sané is not registered to play in this season's Champions League when it resumes in August, the ease with which Bayern clinched an eighth successive league title suggests the Bundesliga giants have the capacity to prioritise Europe in 2020/21.

The signing of Sané surely helps: the versatility of a number of Bayern’s forward players gives them a range of options for next season. Here, we look at how Hansi Flick might use Leroy Sané and the rest of his embarrassment of attacking riches.

As a classic winger

Bayern’s go-to formation under Flick is 4-2-3-1, and it's the shape they are most likely to adopt again next season as they seek to make it nine Bundesliga titles in a row.

In this system, Sané would play as a classic left-winger, with the aim of sprinting beyond the opposition full-back and whipping in crosses for Robert Lewandowski to attack. The Polish striker is formidable in the air and will be the player who most benefits from Sané’s addition to the side. At Manchester City, Sané recorded 45 assists in 135 appearances; evidence of his ability to create chances for his teammates.

David Alaba’s intelligence, positional ability and attacking prowess should make him an ideal partner down the left flank, with Gnabry and Benjamin Pavard providing a mirror skillset on the opposite side of the pitch - a defensively sound, technically gifted fullback behind a pacy and hardworking winger.

Thomas Muller’s ability to find and create space in opposition penalty areas remains crucial to the way Bayern play, and fans will expect the German to improve on his eight-goal tally from last season. Kimmich and Goretzka, meanwhile, provide a solid midfield base behind the attack; a perfect blend of tenacity, energy and forward running. This is a well-balanced team with world-class players in every position.

Check it out on eBay hereView Deal

Part of a three man attack

The formation most Bayern fans will be excited to see unleashed at some point, though probably best saved for Champions League encounters in which they expect to be on the back foot for sustained periods.

Bayern weren’t short of pacy options down the left wing last season, with both Kingsley Coman and Alphonso Davies lightning quick. But Sané offers a far superior end product to either, and generally takes better care of the ball in pressure situations.

With Sané and Gnabry left high and wide up the pitch either side of Lewandowski, Bayern can quickly launch the ball forward from deep when they win it back.

In this system, Thomas Muller would need to be replaced with a more defensive-minded, deep-lying midfielder such as Thiago (should he remain at the club). This would allow the team to sit in and soak up pressure before springing attacks down the flanks.

It’s highly unlikely this formation would be required in the Bundesliga, when teams rarely dominate possession inside Bayern’s half, but it’s not hard to imagine Sané and Gnabry providing an attacking outlet at, say, the Bernabeu in the latter stages of the Champions League.

In an old-school front two

One of the main reasons Bayern rarely play with two strikers is that they simply haven’t had a second centre-forward for a long time. Robert Lewandowski’s consistency and supreme fitness means this has rarely been an issue, but the emergence of 19-year old Joshua Zirkzee - and now the arrival of Sané - means Hansi Flick has options should he wish to experiment.

Sané isn’t a classic striker and was hardly ever deployed as one by Guardiola at Manchester City, but few would deny he has the makings of a good centre-forward; 39 goals from the wing in 135 appearances is testament to his finishing ability and his electric pace would give midfield creators options when in possession.

A 3-5-2 would allow for a classic pacy and powerful front two, without sacrificing numbers in midfield. Alphonso Davies would be perfectly suited to the left wingback role, as he showed against Chelsea in the first leg of the Champions last-16, while Joshua Kimmich is versatile and disciplined enough to take care of the right flank by himself.

New defensive signing Tanguy Kouassi could also benefit from this system. The 18-year old would add searing pace to Bayern’s back three, preventing teams from hitting them on the break. Benjamin Pavard, David Alaba and Javi Martinez could also slot into a back three without any issues, and Bayern fans should expect to see this system more next season.

As a lone striker

Should the unthinkable happen and Robert Lewandoswki get injured for a sustained period of time, the task of scoring the goals for Germany’s biggest club will fall on the shoulders of Zirkzee, Muller and Sané. Muller’s lack of any real physical qualities make him an unlikely candidate. Zirkzee, meanwhile, is a prodigious talent, but replacing the greatest foreign goalscorer in Bundesliga history over a long period could be a lot to ask.

It’s very likely Flick would turn to Sané for at least some of that time. The German could be flanked by compatriot Gnabry and French winger Kingsley Coman to form a devastatingly quick front three. Muller’s experience and ability to create space in the penalty area could also be key to helping Sané find pockets of space to exploit.

Of course all of these formations will depend heavily on who else Bayern bring in this summer, but Sané's qualities and versatility mean they will be a potent attacking threat and favourites for domestic and European success when things resume in September.

COMMENT The Premier League relegation battle: what managers go through in the race against the drop