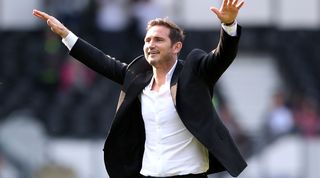 The inaugral Premier League season began with a titanic tussle between Big Ron Atkinson's Aston Villa, Norwich City and Manchester United, who were smarting from being pipped to the title by Leeds United and Eric Cantona a year earlier. Atkinson, armed with club record signing Dean Saunders and Dalian Atkinson up front, steered his side to the top of the table with just six games left.

But then a damaging 1-0 defeat to the Canaries and a 3-0 stuffing at Blackburn Rovers set up a late-season collapse, as United finished 10 points ahead of Villa – giving Sir Alex Ferguson the first of his 13 league titles. Despite League Cup success the next season, Atkinson – who'd managed United in the 1980s – was sacked in 1994 with Villa floundering near the bottom of the table.

Thrillers, rants and records – King Kev led the Magpies charge when they came tantalisingly close to their first trophy since the old Fairs Cup in 1969. His side had a 12-point lead at the top of the Premier League in January, having played one game more, but five defeats in eight matches from February – including that potty 4-3 defeat at Anfield – meant they fell heartbreakingly short.

Eric Cantona, back from a nine-month ban for his infamous kung-fu kick at Selhurst Park, helped Manchester United edge out the Toon Army after Keegan’s infamous ‘love it’ rant on Sky Sports. In the end, he did not love the four-point deficit.

Evans, who was mentored by legendary Reds boss Bill Shankly, led his side to third-place finishes twice in his four years in charge at Anfield. Having signed Stan Collymore from Nottingham Forest for a hefty £8.5m, Liverpool’s expected title challenge in 1996 failed to materialise – although they did arch-rivals Manchester United a favour by ending Newcastle’s title tilt.

Evans’s other third-place finish was notable for the emergence of a fresh-faced Michael Owen, who scored 18 league goals in his first full season but couldn’t help Liverpool get the better of United and eventual champions Arsenal.

Legendary former England boss Robson was appointed at Newcastle in 1999, and brought some much-needed stability back to St. James' after four caretaker and permanent managers following Keegan’s departure in 1997. The Magpies put together a decent string of results – including a nine-game unbeaten run in March and April – to finish fourth and qualify for the Champions League.

Robson steered his side to an even better third-place finish the next season, although they never seriously threatened to gatecrash the title party and finished 14 points behind champions Manchester United. Heady heights Toon fans can only dream of at the moment.

Lampard’s uncle Harry was the last Englishman to get anywhere near the Premier League’s top table. Redknapp oversaw Spurs’ first foray into Europe in 48 years when Peter Crouch’s winner against Manchester City in May 2010 confirmed a landmark fourth-place finish.

5 things I want from Arsenal this summer

Quiz! How many of Arsenal's 50 biggest transfers can you name?