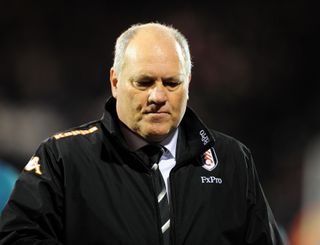 It was the dreadful display to displace all others. Stan Collymore called it the worst away performance he's ever seen in the Premier League. Martin Jol was just relieved to get away without a hammering.

From the first whistle there was never a question of a Fulham win at Southampton on Saturday evening, but only by how many the west Londoners would lose. Would they even register an effort on goal?

For the first half the answer was negative - meaning Fulham are the only side this season yet to do so in the first 45 minutes of a match this season.

Five days previously the Cottagers had dismantled Crystal Palace at Selhurst Park, lighting up south east London with crackerjack goals from Pajtim Kasami and Steve Sidwell among their four-goal haul. Here, though, they would have needed two matches to record even as many shots.

Southampton were able to enjoy 67% of the ball, outpass their opponents more than twice over and convert their dominance into two goals with a clean sheet to boot. The game's top eight passers were Southampton players, while not a single Fulham player created a chance for a team-mate.

Kasami and Bryan Ruiz strutted around with disregard for their defensive duties while Nathaniel Clyne and Luke Shaw bombed forward. Dimitar Berbatov completed just 16 of his 27 passes in 90 minutes. Darren Bent was hopelessly anonymous.

The cherry on top came via Berbatov, who, moments after being instructed to mark Rickie Lambert by skipper Scott Parker, completely ignored the orders and allowed the unmarked striker to net the opener.

Jol laughed off his side's dreadful first half and pointed to an improvement after the break - but more of the same will leave Fulham in deep trouble. While Palace seem present and accounted for in the Championship next season, none of the inconsistent water-treaders above are beyond the drop.

You have to wonder when things will start to improve at Craven Cottage, though - this malaise is nothing new. They've lost 11 of their last 17 top-flight games while looking like an unbalanced side with too many freeloaders doing whatever they please. It should be time for change - starting with Jol. New owner Shahid Khan won't tolerate this for too much longer. (JB)

Once upon a time, Adam Johnson was considered part of English football's future. Back in 2010, when looking towards Euro 2012 and assessing players Fabio Capello felt could make an impact at senior level, the Italian identified Johnson - along with Jack Wilshere, Jack Rodwell and Kieran Gibbs - as players he would keep an eye on.

If that sounds crazy in hindsight, consider Roberto Mancini comparing Johnson to Ryan Giggs. "Johnson is a great player," said Mancini after signing the Sunderland-born winger. "I remember Ryan Giggs when he was young and the way he moved. Johnson is the same player."

Or, crazier still, the time Johnson was criticised by his manager because he was expected to be as good as David Silva. "A player like him should play well every game, like David Silva," said Mancini in 2011, in a bust-up so bitter Johnson nearly refused to board the team bus home after a League Cup game at Wolves.

After watching him amble around for 69 minutes against Newcastle the question springs to mind: what has happened to Adam Johnson?

While his work in grabbing an assist for Steven Fletcher's goal was commendable, Johnson offered very little else. There was none of the trickery and cutting edge he is known for: he only tried to beat his man once in the entire game. And failed.

Furthermore, he only made five forward passes all game, offered a pitiful four completed passes in the final third and fell asleep at the back post for Mathieu Debuchy's equaliser - not good enough for a player who cost £10million.

In hauling him off, Gus Poyet showed he is not prepared to let players live on name alone. It was a brave decision but a sensible one: his replacement Fabio Borini slammed in a dramatic and memorable winner late on.

"I have seen so many players like Adam in my life, both when I played and since I have been a manager," barked Mancini in 2011. "Sometimes players like Adam play very well in one game but only so-so the next. He should not think: 'I have scored a goal, this is enough'."

Johnson's performances in recent seasons suggest Mancini had a point in his critique of the England international. An assist (his only one to date in the Premier League this season) will provide encouragement, but the 26-year-old needs to kick on under his new manager. (JF)

Spurs may not have shone in Sunday's scrappy win over newly-promoted Hull, but their new golden boy once again came to the fore.

Andros Townsend once again played like a man with a point to prove, on an afternoon when many of his more experienced team-mates seemed happy to just cruise through the 90 minutes.

As we've come to expect, Townsend was always willing to run at opposition defenders - he successfully completed 8 of his 9 attempted take-ons and at times looked like he just couldn't be knocked off the ball, but he also made passes at the right time. Townsend created 2 openings for team-mates, while only Kyle Walker completed more passes in the attacking third over the course of the match.

These impressive figures came despite Townsend spending over five minutes off the pitch receiving treatment after crashing over an advertising hoarding and into a photographer. The fact he was so keen to re-enter the fray for the dying minutes when many other players would make for the dressing room speaks volumes for his drive.

Townsend may not yet be quite at the level Gareth Bale found at White Hart Lane, but he's continuing to show he shares more than a few of the qualities that made the Welshman such a key figure in N17 - and that includes the ability to drag his team forward. (JM)

City needed to add some umph to their tackles

In their defeat to Chelsea at Stamford Bridge, too many times Manchester City’s players were blown away by the men in Blue. The visitors threw themselves into 38 tackles, but only 22 were successful – that’s just 57%.

Chelsea had four of the top five dribblers in the game in Branislav Ivanovic, Ramires, Torres and Eden Hazard. They also had three of the most fouled players – with Torres, Hazard and Ramires taking the brunt of the punishment.

City simply couldn’t get close to them - and they paid for it. (BW)

All to play for in wide-open league table

Last season, 8th-placed West Brom finished only a point closer to 7th-placed Liverpool than they did to relegated Wigan. That may be evidence of the Premier League's glass ceiling (although if so, Southampton appear to have found a cat-burglar's window-cutter), but it's also evidence that outside the Euro-zone, the competition is getting ever more fierce – especially as this season appears to be taking the pattern still further.

After Sunday's games, 9th-placed Swansea are just three points clear of Norwich, in the top relegation spot. As a comparison, after nine games last season, there were 10 points between 9th and 18th. With Sunderland picking up their first win, and Crystal Palace hoping for a similar new-manager uplift soon, the Premier League could get tighter still.

Such a compression of the division is no bad thing: it makes the league genuinely interesting, giving every team something to fight for – and to worry about.

Some may carp about the teams being much of a muchness, but that's an argument that promotes stratification over competition. The Premier League has been criticised for that in the past, so why not enjoy a genuinely competitive season? (GP)