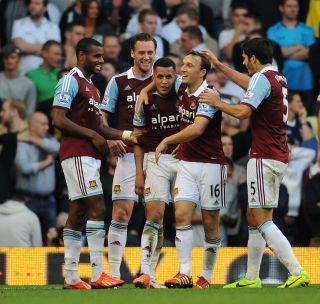 For Spurs, Sunday's surprisingly heavy defeat to neighbours West Ham was the perfect storm. Their own poor individual performances, tactics and team selection were compounded by the Irons' superb team showing and flawless following of Sam Allardyce's tactical masterplan.

In the first half, the Hammers sat deep and frustrated Spurs, looking to spring counter-attacks when the opportunity arose. Despite this they still created the best chance of the opening 45 minutes, when Kevin Nolan shot wide after Mark Noble ingeniously dinked a free-kick over the Tottenham wall.

They eventually did take the lead through a set-piece, when Winston Reid prodded home at the second attempt, and were able to rub salt into Spurs' wounds a further two times when the game became more stretched as the hosts desperately chased a way back into the tie.

Spurs didn't seem to know how to deal with West Ham's pragmatic approach, appeared ill-prepared for the challenge placed before them, and lacked the patience required to break down a team that regularly put seven or eight players behind the ball.

They also suffered for being slightly lop-sided, with right-footers Kyle Naughton and Gylfi Sigurdsson both playing on the left, cutting inside and making the centre of the pitch more congested. This played right into West Ham's hands.

When Tottenham did manage to get the ball into the opposition area, Jermain Defoe was unable to cause his former club much worry - the England striker lacks the presence and guile of Roberto Soldado. The Spaniard may not have scored against Tromso or Anzhi, but he would at least have been able to help the likes of Christian Eriksen and Gylfi Sigurdsson find openings in the final third.

West Ham were as impressive as Spurs were awful and the scoreline didn't flatter them. The defeat will leave Andre Villas-Boas with plenty to ponder, not least how on earth a team that had previously conceded just twice in 11 matches could ship three goals in 90 minutes to a team without a recognised striker.

Ravel Morrison's goal - West Ham's third of the match - is likely to see the former Manchester United starlet the man to grace Monday's back pages, but centreback Reid is also well worthy of heady praise.

The New Zealander made 3 tackles, won 4 aerial duels, made 6 interceptions, 7 headed clearances (9 in total) and 9 ball recoveries. That's not to mention the fact he opened the scoring and, without wanting to leave West Ham fans feeling too giddy, the defender actually attempted more shots than their old mate Defoe. (JM)

When Jose Mourinho was handed the Chelsea job for a second time this summer, part of his brief was to carry on the gradual evolution in playing staff, as the Blues look to move towards a younger, new generation of players. Didier Drogba is a beautiful but now distant memory, and while John Terry and Frank Lampard will forever be club icons, their days left at the highest level are numbered.

Roman Abramovich, perpetually locked in an endless existential quest for the aesthetic, has put enormous sums into redeveloping Chelsea, with a high player turnover - indeed, it's been interesting to note that two of the Premier League's main protagonists at this embryonic stage of the season - Daniel Sturridge and Romelu Lukaku - are or have been Chelsea players.

What's increasingly becoming clear though, as the 3-1 win at Norwich proved, is that as Chelsea's new era gradually takes shape, Oscar is fast becoming the main man.

Oscar is no grouch, nor is he particularly wild, but what he does possess in abundance is the tactical versatility and game intelligence to be a leader of Mourinho's new Chelsea for years to come.

Incredibly selfless and hard-working, Oscar has a wonderful personality and efficiency about his game. He brings others into play, links with midfield and attack and drifts laterally into pockets of space, dragging opponents out of position to allow the likes of Mata, Ba and Schurrle (as against Norwich) room to manoeuvre.

His versatility is also a huge asset for Mourinho: he can play as a central midfielder or as the right, left or central attacking prong of a 4-2-3-1 system, as displayed by the very different positions he took up in Chelsea's last two league games.

At Carrow Road Oscar displayed how valuable is to Chelsea's game, winning both tackles he contested, succeeding in 3 of 5 take-ons, completing 88% of his 50 passes and scoring with his only shot on target, a wonderfully-struck opener. It's the type of form that has seen him start all but one game this season, during a period when Mourinho has constantly chopped and changed his forward line in search of the right formula.

Oscar may not have the fierce leadership of a Terry or the ignore-me-at-your-peril raw magnetism of a Drogba, but the Brazilian is a fundamental cog in Mourinho's gradually improving machine. (JF)

They saw off Everton at the Etihad on Saturday, and deservedly so, but Manchester City still have big issues that will concern Manuel Pellegrini.

While City's defensive woes have surfaced with captain Vincent Kompany on the pitch this season, the Belgian rock's first-half substitution against the Toffees is still a big worry. It's not yet known how long City's influential skipper is to be sidelined, after Pellegrini did not reveal the extent of the 27-year-old's "muscular" injury.

City have conceded eight goals in the Premier League this season, half of which can be attributed to notably poor defending. Most concerning is their susceptibility to concede when teams attack them directly.

Kompany was the only man to keep his place in the back four that were humbled by Bayern Munich in midweek - but it didn't stop Romelu Lukaku from exposing yet more frailties. Phil Jagielka's long ball should have been dealt with comfortably but instead Lukaku embarrassed a hapless Joleon Lescott before squeezing the ball underneath Joe Hart (as if England's No.1 doesn't have enough problems of his own).

It's not the first time in recent weeks that City's centre-backs have cost them dear. Take their last Premier League outing, for example - defeat to Aston Villa, thanks to Matija Nastasic and Kompany's dreadful work from Brad Guzan's hopeful punt upfield. Another long ball, another blunder.

In the 3-2 defeat to Cardiff (without Kompany), City's makeshift defensive partnership of Lescott and Javi Garcia allowed Fraizer Campbell to head home from corners twice in the space of eight minutes.

Going forward things look just fine, but Bayern proved just how penetrable City can be with all-too-regular moments of weakness. Hart looks broken, Nastasic far from the player of last season, Lescott cumbersome and Garcia a truly last-resort option. Keep getting it wrong and they might find the wheels come off this season's title charge even earlier than last time out. (JB)