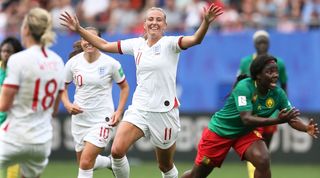 Above all else, England dominated

This is the real topline, despite everything else. This was a 3-0 victory and didn’t particularly flatter England, despite some deficiencies. With 68% possession, this is not a match that will be remembered as a lucky break.

In the first half, the Lionesses rarely looked in danger, dominating play and getting into a deserved 2-0 lead. Even in a fraught second half, the team still managed to close off the result with half an hour to go.

Lucy Bronze was a constant danger pushing forward on the right flank – only centre-half Mille Bright completed more passes – and Fran Kirby looked sharper than in her previous appearances. Captain Steph Houghton, meanwhile, very much led from the back – she is rarely the cause of England’s problems, and often the solution to them.

The three goals highlighted different parts of this team’s strengths. Houghton’s goal for the first from an indirect free-kick helped settle the nerves, while Ellen White’s came from good build-up just before the break, and sent the Cameroonians into a disarray that cannot have helped them. The third, a Toni Duggan corner to Alex Greenwood’s feet which she took first time, was a clever move; the result of both players being more quick thinking than those around them.

England fell apart more than Cameroon did in the chaos of the first 15 minutes of the second half. Cameroon had a goal correctly disallowed on 48 mins after a poor Karen Bardsley clearance. Alexabdra Takounda Engolo then forced a good save from Bardlsey on 53 minutes after a sloppy misplaced pass from left-back Greenwood. Two minutes after that, Bardsley had another let-off: caught between two minds whether to come out for the ball with an attacker closing down, the ball was knocked past her before an offside was given.

The goalkeeper’s distribution felt a permanent scare in a team that happily builds slowly from the back (the top two passing combinations in the match were Bright to Houghton and Houghton to Bright; the top 12 all include at least one of England’s back four), and Phil Neville has already picked Carly Telford in the World Cup.

Even in the first half, there were occasionally gaping chasms left in the centre of the field that better sides could exploit. Norway, who England face on Thursday, are both a much better and - as they showed against Australia - capable of exploiting that kind of space.

Pain in the VAR-se... again

Well, we had to cover it.

The big talking points all come from the refereeing, despite most of the big decisions being correct. In fact, the only major things referee Liang Qin got wrong bookended the game, and were lenient to Cameroon: there should really have been red cards for an elbow on Nikita Parris early on, and for an awful challenge by Takounda on Houghton deep into stoppage time.

Arguably, it could even have been worse than that for Cameroon. Toni Duggan was left to wipe phlegm off her arm in a moment that was probably (and probably correctly) dismissed as accidental, while Jeannette Yango’s in-play shove on the referee was a little overzealous, and might have been punished in different circumstances.

The sight of Cameroon’s players refusing to kick off after England’s second goal will be a lasting image of this tournament, and points to a bigger problem around VAR than whether it slows things down. How do the authorities handle the technology, and how do they explain their decisions? Moments needing video assistance were not played back on the big screens in the stadium, which did not help, and there was clearly some failure to communicate to the players from the referee. This will continue to cause headaches for FIFA.

While performance levels may have dipped, England’s players kept their heads. That will be a huge plus for Neville.

Lucy Staniforth and Leah Williamson become the final outfield players to get minutes at this World Cup with substitute appearances, in another changed side for Neville. Only Mary Earps, the third goalkeeper, has yet to get a run-out.

The manager may get exasperated with questions about his constantly-changing line-ups, but failure to explain his reasoning will keep those posers coming.

It's time to buck up

Norway in Thursday’s quarter-finals will be the most difficult test so far. England’s route to the final is harder than second-place Japan’s, despite them facing a tough tie against Euro 2017 champions Holland on Tuesday.

Beyond Norway – no easy feat in itself – lies the possibility of a semi-final against the USA or France, who have looked the strongest two sides in the World Cup so far.

Four wins, eight goals and only one conceded is a nice building block for the Lionesses to this point, but the performances so far have not been enough to suggest any more matches will be this easy.

While you're here, why not take advantage of our brilliant subscribers' offer? Get five issues of the world's greatest football magazine for £5 – the game's greatest stories and finest journalism direct to your door for less than a pint in London. Cheers

QUIZ Can you name these 40 national teams by their nicknames?