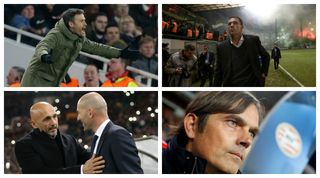 Bruno Genesio had never experienced the highs and lows of football management until he was surprisingly offered the job at French club Lyon in December. A bigger surprise occurred two months later as his team’s 2-1 defeat of Paris Saint-Germain at the weekend broke Laurent Blanc’s unbeaten league record.

"I'm very proud and very happy," said a delighted Genesio. "We really pulled something off here tonight There is spirit in this squad. We need to hang onto it… we need to make the most of these moments. I have faith in my squad. They know where they want to go."

Francesco Totti’s tussle with his manager Luciano Spalletti is all the rage in Rome. The player’s recent outburst at being dropped by Spalletti is no more than a frustrated confrontation with time.

But Spalletti is king now; king of one of the hottest managerial seats in the world. Roma's fanatical supporters expect so much more than they are given – just three Serie A titles in their history and only two Coppa Italia titles in the last 25 years. Spalletti brought them both, in 2007 and 2008. An unusual departure to Russia followed, where he led Zenit St Petersburg to two titles.

Yet those achievements seem vastly undervalued across the continent. Between his sacking by Zenit in March 2014 and his return to Roma almost two years later, not one club offered Spalletti a job. He was never a name on the lips of the British press when Premier League managerial vacancies became available.

After six successive wins in Serie A, lifting them to third in the table, Roma are vying for Serie A's third–place Champions League qualifying berth – and the Giallorossi are fanatically voicing their support once again.

Frankly, so too do Fiorentina and Inter as they too tussle for position. Both teams visit the capital in March for what Spalletti has described as "a vital month in the history of this club".

Former Brighton and Sunderland boss Poyet moved on to managerial pastures new in October when AEK Athens agreed terms with him in October until this summer. Such a short-term contract revealed the club’s niggling doubts about Poyet’s calibre, but they needn’t have worried: the Uruguayan has since led the club to second place in the Greek Superleague.

And he continues to relish breaking his opposite number’s unbeaten record, just as he did to Jose Mourinho's Chelsea during his time in the Black Cats hot seat. He recently masterminded a 1-0 victory over already-champions Olympiakos – their only defeat in the league this season after winning their opening 17 league fixtures.

AEK Athens supporters haven’t tasted championship success for 22 years, but with Greek gods smiling on Poyet’s fortunes, there are legitimate hopes that he is the man to lead them to title glory in the coming years. First things first, a new contract for the manager maybe?

It's a shame so few have heard of Zdenek Scasny, a man with almost 25 years in management across a variety of countries and cultures. Yet despite a number of trophies to his name, he remains largely anonymous. Perhaps he will finish this season in the European limelight, although if the bookmakers are anything to go by, he doesn’t stand a chance – of the 16 teams left in the Europa League, Scasny’s Sparta Prague are longest odds to win it.

Scasny’s managerial travels have taken him from the southern shores of Greece and Cyprus to the easterly regions of Hungary and, most successfully, the Czech Republic. Two consecutive championship titles at Sparta Prague in 1998 and 1999 merited an invitation to return to the club 16 years later.

Sparta have now won their last nine games in all competitions, sit second in the Czech league and are experiencing the dizzy heights of unchartered territory in the last 16 of the Europa League, a competition in which they remain unbeaten.

Scasny now faces his toughest challenge in Lazio, although the 58-year old is grateful for this draw. "I think we could have got a much more difficult opponent," he noted. A European quarter-final appearance beckons, but winning a domestic title 17 years after his last triumph at Sparta would also be a record-breaking achievement.

Battle of the month: a Brit in the mix

Belgium are 11th in the UEFA rankings, making Chris O’Loughlin the highest-placed British manager abroad. O’Loughlin’s Sint Truiden are nonetheless fighting it out in the lower reaches of Belgium’s top tier, though, with just three points separating the bottom five teams. Only two matches remain this season, with Sint Truiden two points ahead of bottom side Mouscron-Peruwelz.

O’Loughlin was promoted from assistant to head coach in September, replacing Yannick Ferrera at a time when Sint Truiden were fifth (Ferrera’s ambition took him to Standard Liege). Since then O’Loughlin – and his assistant Benni McCarthy – have struggled.

Battles to watch in March