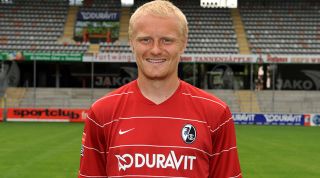 Between 2004 and 2011, Bechmann scored 13 times in 82 appearances for Bochum, then eight in 49 matches for Freiburg – but now he's hit the jackpot of a different kind.

While holidaying with his family in Spain, the ex-Denmark U21 international discovered that he'd won the Danish lottery's five million krone (£585,000) prize.

Bechmann picked his numbers using the birthdates of his children, and the tactic paid off.

"I checked the sender's address and saw it was the same one that had notified me when I won 50 krone before," he told Danish newspaper Ekstrabladet.

"I called [lottery organisers] Danske Spil and they confirmed the news to me.

"The winter holiday will probably be a little more luxurious than planned..."

After leaving Freiburg in 2011, Bechmann had returned home to play the last five-and-a-half years of his career with first division club SønderjyskE. He retired in January.