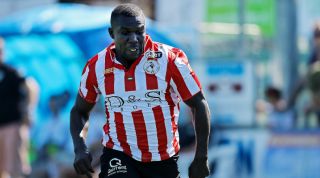 Royston Drenthe, who was widely considered one of the bright young stars of Dutch football at an early age, retired aged 29 following his release from UAE Pro League side Baniyas in July 2016.

Last year, he spent a significant period of time launching a rap career under the alias 'Roya2faces' and was quoted as saying he was "fed up with all the stuff in the football world".

But now he's back in professional football as he has agreed a one-year contract with Sparta Rotterdam following a successful trial with the Eerste Divisie side. He featured in Sparta's first friendly ahead of the 2018/19 season against Heinenoord last Saturday.

"In the two weeks that Royston has been training, he has turned out to be an asset for selection," technical director Henk van Stee told the club's official website.

"He is fit, extremely motivated and he has not forgotten his football at all. Both ourselves and Royston are very enthusiastic and pleased that he is now strengthening our squad."

Drenthe added: "In recent years I often missed having fun in football but I've quickly recovered that at Sparta.

"I am grateful to Sparta for this opportunity and hope to help the club to promotion."