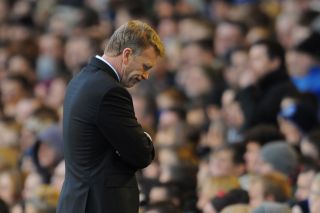 To associate Manchester United with an utterly hapless day in the transfer window is unheard of - and yet they managed it.

After spending two months dilly-dallying with feeble efforts to sign Cesc Fabregas and not a lot else, the Old Trafford giants left it until the last day to splash £27.5m on Marouane Fellaini – £4m more than his reported summer buy-out clause – turn down the chance to sign Mesut Özil, fail with efforts to sign Real Madrid duo Sami Khedira and Fabio Coentrao, and cause confusion beyond comprehension with attempts to snare Athletic Bilbao midfielder Ander Herrera.

That's not even mentioning the 'imposter' officials who rocked up in Spain pretending to represent the club.

Nope, it doesn't get any better on second reading either. While Fellaini is by no means a bad signing for David Moyes' men, there are huge questions to be answered by the club's new chief executive Edward Woodward in the aftermath of such a farcial day for England's most successful club. As if Moyes' job wasn't already hard enough, it's looking like an uphill struggle from here.

Tottenham midfielder Tom Carroll looks like two things: a very exciting prospect, and about nine years old. The babyfaced 21-year-old has impressed in the Europa League and been entrusted with a regular spot on the bench for Premier League games, even registering an assist last season in Tottenham's 3-2 win over West Ham (admittedly, he passed the ball about two yards to Gareth Bale, who then wellied it in from another postcode).

Before he can realistically hope to challenge for a starting berth in Spurs' extremely strong midfield, however, Carroll needed a loan move of the kind that benefited Kyle Walker (at Aston Villa in 2011), the now-departed Steven Caulker (at Swansea in 2011/12) and Danny Rose (at Sunderland last season). He'd already turned out for Leyton Orient and Derby but now looked ready for the regular Premier League football required for his progression as a player. It wouldn't be a one-way boon, either: the Watford-born creator has been compared with Luka Modric and a number of Premier League clubs would have benefited from his dynamism and distribution.

Instead, Carroll finds himself at Loftus Road, pushing for a starting place in a QPR side that numbers Joey Barton, Karl Henry, Alejandro Faurlin and his former team-mate, Jermaine Jenas, among its central-midfield options. Competition is healthy, of course, but Carroll would have faced the same issues – and a better standard of football – at a club such as Fulham or West Bromwich Albion. He'd also have been part of a more settled environment and a less relentless push for success. Desperate to be promoted from the Championship this season, Harry Redknapp can't afford to tolerate the odd mistake.

Having played in the Championship before but rarely against the game's elite, it's hard to know what Carroll will learn from this loan spell. Even a four-month loan would have been preferable: enough time to show top-flight sides what Carroll could offer them.

Nine months ago, time spent with QPR would have been ideal. Carroll would have been playing Premier League football and a panicky R's side would have welcomed his passing in midfield. Right now, though, it is very much a step sideways in his development.

Arsenal's record-breaking purchase of Özil from Real Madrid deservedly hogged the headlines as the transfer window gently blew shut, but Everton emerged as modern-day footballing Dick Turpins by stealing a number of jewels.

At the start of the summer the Toffees' main aim would have been to keep Leighton Baines and Fellaini out of the clutches of David Moyes at Manchester United; to end it with Baines still at the club and £27.5m in the pocket for the sale of Fellaini counts as business well done by chairman Bill Kenwright.

On top of that success came exciting midfielder James McCarthy, proven safe house Gareth Barry and a seriously impressive loan deal for Romelu Lukaku, who is arguably better than Chelsea's other striking options, let alone Everton's. This was having already taken the hotly tipped Gerard Deulofeu on a temporary basis from Barcelona.

Everton's late success was as unexpected as a good night's kip in Syria. Roberto Martinez had criticised the window's continuation into the season and had been criticised himself in some quarters for bringing three – now four – players from the Wigan team with which he was relegated in the last campaign. But the Merseysides have, without doubt, ended up a stronger side even with the (lucrative) sale of the horror-haired Fellaini.

In July, veteran centre-back Martin Demichelis strolled into Atletico Madrid on a free transfer from Malaga. A new club, a new start.

Hopefully his things were still in boxes, though, because on deadline day he packed his bags for Manchester City to reunite with former boss Manuel Pellegrini for £4.2m.

The gleeful Spaniards used their profits to snap up Ajax’s highly-rated stopper Toby Alderweireld instead - not bad for offloading a player who never even made an appearance. Manchester City’s owners, meanwhile, probably lose more money down the back of the sofa.

Ultimately the centre-back will provide much-needed cover and experience to a team that was crying out for new blood in defence. With experience at the highest level with Bayern Munich and Argentina's national team, Pellegrini will be pleased his tried-and-tested favourite is back in his loving arms. Ahhh.

A tie between John Brayford and Razvan Rat. Brayford was highly regarded in the Championship last season while playing for Derby County and seemed a brave, forward-looking investment by Cardiff as they sought a new right-back. But so far, centre-back Matt Connolly has continued to play in his adopted new position, despite enduring a torrid time against West Ham on the opening day. Derby fans are starting to wonder if Brayford, who was the subject of a rejected bid from Wigan before his Cardiff move, is going to get the chance they think he deserves.

West Ham, meanwhile, signed an underrated player in Rat (pronounced 'Rats' or, if you're a West Ham player, 'Roland'), and on a free transfer too. The Romanian left-back, while 32 and not a regular for Shakhtar last season, offers support in attack and plenty of big-match experience – but he currently finds himself behind Joey O'Brien in the pecking order. Odd.

West Brom's transfer policy is an intriguing one. The Baggies tend to bring in players on loans and free transfers but spend big when they do cough up: see £6.5m Shane Long in 2011, their only purchase that summer, and £4m goalkeeper Ben Foster last season after a loan spell.

The freebies have often yielded fantastic results: underrated anchorman Claudio Yacob arrived for nothing last season, just as first-team defenders Gareth McAuley and Billy Jones had the year before. And winning the services of Romelu Lukaku was, of course, a masterstroke.

This year, it looked as though West Brom's annual solo buy might not even materialise. More talented players had come in – Nicolas Anelka and Diego Lugano on permanent contracts, Matej Vydra and Scott Sinclair on loan – but for better or worse, not a penny had been spent up front.

Then, out of nowhere, Albion suddenly woke up on transfer deadline day and splashed a club record fee on Sunderland's Stephane Sessegnon and a further £5m+ on injury-prone Everton forward Victor Anichebe. Whether Steve Clarke's plan all along had been to wait until the very end of the window and then spend his millions, we don't know, but it was oddly out of character for the club and adds a bit of pressure after years of risk-free trading. It'll be interesting to see if the punt pays off.

If at first you don't succeed...

You could have forgiven Peter Odemwingie a sigh upon hearing of Cardiff's interest on deadline day. After January's (entirely self-inflicted) public humiliation - turning up at QPR's training ground to try and force thorough a transfer - the striker must have endured a feeling of déjà vu as he made his way to south Wales.

This time, however, it all worked out for the Nigeria international. After playing only a handful of times since his comical Loftus Road outing it's a welcome chance for the 32-year-old to make his mark on the Premier League once again.

For Newcastle fans it's been a quieter summer than many would have hoped. That said, with Joe Kinnear arriving with football's finest on "speed dial", Toon fans were expecting big things of their new director of football (well they weren't, but at least something).

There have been signings, with Loic Remy joining the North East club on loan (and 16-year-old Oliver Kemen from Metz), but it’s nowehere near what the St James' Park faithful were expecting after last season's dismal campaign. Talks with the likes of Demba Ba and James McCarthy were whispered on deadline day, but it seems the Magpies were never really in the race for either.

Is it even possible for Kinnear to become more unpopular anymore?

It's unlikely that Guillermo Varela, a 20-year-old full-back signed from Penarol in Uruguay, expected to feature much at Old Trafford this season. Still, he probably wasn't hoping to hear quite so many people say – before the Fellaini scoop – that "Manchester United haven't bought a single player this season...oh, OK, apart from that guy."

See also: 20-year-old striker Yaya Sanogo, Arsenal's only acquisition for the best part of two months and victim of being associated with Arsene Wener's not-always-popular preference for signing young French talent on the cheap.

Cardiff City aren't on the telly much, but when they are you might suspect that commentators and pundits are praying the Bluebirds' new signing from Rennes doesn't feature. Defender Kévin Théophile-Catherine doesn't trip off the tongue all that easily, not least with those pesky accents, so expect his name to be shortened to the more English-sounding Kev Theo-Cate before long. Honourable mentions: Everton's Gerard Deulofeu, Fulham's Elsad Zverotic and Sunderland's Ondrej Celustka.

Emiliano Viviano, Arsenal's new goalkeeper on loan from Palermo. It rhymes and everything.