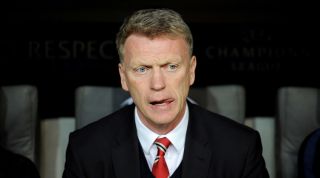 A short statement released on United's official Twitter profile on Tuesday confirmed the Scot's departure, while thanking him for "the hard work, honesty and integrity he brought to the role".

Moyes was viewed by many as the natural successor to club legend Alex Ferguson and was hand picked by the 72-year-old to succeed him following his retirement.

But the faith shown in awarding the ex-Everton boss a six-year contract proved misplaced, with United relinquishing their Premier League crown tamely while also crashing out of the Champions League, FA Cup and League Cup. Sunday's 2-0 defeat at Everton left United in seventh place - some 23 points adrift of leaders Liverpool - and with no chance of qualifying for next season's Champions League.

Here we look at five low points of Moyes' disastrous time in charge of the 20-time English champions.

Aside from a 1-0 defeat at Liverpool, United had made a solid start to life under Moyes. However, this humbling at the hands of their closest neighbours last September was a clear indicator of the difference in quality between the two sides, which was showcased for a second time last month when City strolled to a 3-0 win at Old Trafford. Sergio Aguero scored twice for Manuel Pellegrini's men, while Yaya Toure and Samir Nasri also found the net as the hosts ran riot in a game that would prove to be just the start of the nightmare for Moyes.

After losing the first leg of their League Cup semi-final 2-1, United needed a turnaround against struggling Sunderland at Old Trafford to set up a Wembley clash with City. Moyes' men made a strong start and took the lead through defender Jonny Evans, but they could not find a second in normal time and were stunned in the extra time as Phil Bardsley put the visitors ahead on aggregate. Javier Hernandez immediately levelled for United, but that was followed by a capitulation in the resulting penalty shootout, which saw them miss four of their five attempts and exit the competition in embarrassing fashion.

One of the few positives of Moyes' spell in charge of United was their strong form in the Champions League group stage. They progressed from their pool without losing a game, but made a humiliating start to the knockout rounds as the three-time winners slumped to a listless defeat at Greek side Olympiacos in the last-16 first leg. Alejandro Dominguez put the hosts in front before a vicious long-range effort from Joel Campbell put Olympiakos in command of the tie. United turned things around at Old Trafford as a Robin van Persie hat-trick guided them into the next round, but their meek surrender in Greece against a side of relatively low stature in the European game was for many the epitome of the club's struggles under Moyes.

United's disappointing season will have been made all the worse by the outstanding campaign enjoyed by arch rivals Liverpool, who sit five points clear at the top of the Premier League with three games to go. The Merseyside outfit claimed home and away league wins over United for the first time since 2008/09 with a comprehensive 3-0 triumph at Old Trafford. United conceded three penalties in a terrible performance, Liverpool captain Steven Gerrard scoring twice from the spot to put Brendan Rodgers' men in command before missing his other attempt from 12 yards. United skipper Nemanja Vidic was sent off for conceding the third penalty, and yet another abysmal day for Moyes was capped off six minutes from time when Liverpool's talisman Luis Suarez found the net to further United's misery. That was only deepened at the next home league game as City delivered another hammering.

The final nail in Moyes' coffin came at the home of his former employers, who became the second Merseyside team to complete a league double over United with a comfortable 2-0 triumph at Goodison Park. Everton had ended a wait of over 21 years for a win at Old Trafford with a 1-0 away success earlier in the campaign, but this victory was far more emphatic as Roberto Martinez's side completely outclassed United in a superb display of attacking football that kept them firmly in the race for a Champions League place.