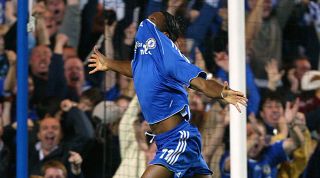 This is all 64 players to net for the Blues in this competition since 1992/93. Ten minutes are on the clock and each player's Champions League goal total for Chelsea, their country and position are below. Let us know your score @FourFourTwo – we’ll retweet the best efforts, if you don’t give answers away – and please challenge some friends to see if they can best your total.

QUIZ How many of the 141 clubs to appear in the Champions League group stage can you name?

"Today was just a mad one," sighed an overwhelmed Frank Lampard, after his Chelsea side came back from 4-1 down to draw 4-4 with Ajax at Stamford Bridge last night – in a game that also saw two penalties, two red cards, an own goal and a disallowed winner.

It's not the only dramatic Champions League game the Blues have been involved in, but it did see a couple of players nab their first goals for the club in Europe's elite competition. In total, 64 have got on the scoresheet – but you knew that already, so why not take a screenshot of your score, and send it over to @FourFourTwo to see how you compare to others.