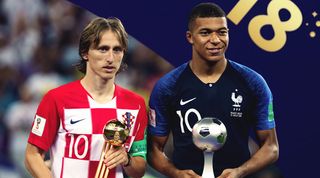 NOW TRY Quiz! Can you name the last player to wear number 1-11 of every Premier League club?

Didn't win the World Cup? Never mind, there are always the FIFA World Cup awards to be won, too.

Just in case we forget who dominated World Cups of yesteryear, the various awards introduced over the years help to lay markers for who truly were the best players of each tournament.

Win a Golden Boot - or shoe, as it used to be - and you'll forever go down in history as a great striker of the game. Same with the Golden Glove.

Yes, it feels like an end of year school popularity contest where the kids who have been paying attention get a bag of Mini Eggs for their attendance, but still - we want you to name the World Cup award winners, today.