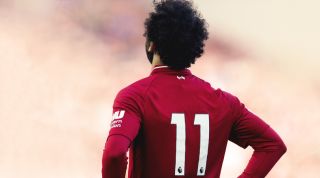 18 minutes on the clock, 220 names to guess. Players no longer on the current squad list as having that number have an asterisk next to them - even if they're on loan.

What shirt number would you pick? Everyone has their favourites.

Some go for the No.7, 9 or 10, simply because it's prestigious within the game. There are the players who became synonymous with numbers outside the first eleven - think Thierry Henry's classic No.14, or David Silva's No.21.

There are those who choose their numbers for odd reasons too. Mario Balotelli allegedly picked no. 45 for City, because four and five added up to nine - the number of a striker. AC Milan, however, once had a clutch of players including Ronaldinho and Andriy Shevchenko all choosing their birth year as their shirt numbers.

Perhaps Gianluigi Buffon has the strangest reason for picking a number - 88 - when he was at Parma. "I have chosen 88 because it reminds me of four balls," Gigi remarked, In Italy we all know what it means to have balls: strength and determination."

Today, we're steering away from the high numbers though - we'd like you to name the last player to wear shirts 1-11 for each of the Premier League sides. This one will take lots of 88 to complete.