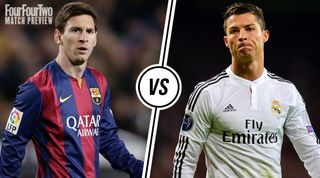 The most hate-filled game in world football. And that’s just inside the away dressing room...

Clasico week in Spain is usually seven days like no other. Desperate to fill their pages with something other than prepositions, pretty pictures or special cutlery gift set giveaways with embossed club badges, the four daily Spanish sports papers cling to a meaningful game like Barcelona vs Real Madrid with the eagerness of a child to their comforter.

This week, however, things have been strangely quiet, the Champions League taking precedence until Thursday morning. In Madrid, it was all Atletico’s shootout heroics against Bayer Leverkusen, while Barcelona’s hosting of Manchester City took all the headlines further towards the Pyrenees.

The front pages that usually squeal about how a member of the opposition has, at some point, had sex with a pig [delete this, subs, he’s probably made it up, again. Ed.] have been strangely absent of Clasico chat.

Last week, los Blancos’ president Florentino Perez confirmed coach Carlo Ancelotti would see out the season, come what may, while Barcelona have emerged from crisis to being the greatest side in history again. If the Catalan press are to be believed, anyway.

Perhaps the best Clasico story of the week came not from a partisan sports paper, but quality daily El Mundo, who employed a body language expert to interpret Cristiano Ronaldo’s displays of disaffection in Sunday’s 2-0 win against Levante. The Catalan press missed a massive trick.

“His gestures show he’s frustrated,” trilled psychologist Joaquin Dosil. Given that he’d told the Bernabeu crowd to “go f*** yourselves”, you might be onto something there, Senor Dosil. “He’s suffering from stress, excess tension and irritability. After a couple of sessions, though, I’m sure he can regain his best form.”

“Here’s my mobile number, call me,” he didn’t add, because we also made that up.

“Cristiano always returns,” Marca responded. “Ligas are won at the Camp Nou.” They’ve also done a bit of BBC (not the horrendous Bale, Benzema, Cristiano acronym) bashing recently, after the broadcaster accused the paper of having a Bale vendetta over a Marca article last week.

“The BBC has veered off the course that made it a byword for quality journalism throughout the 20th century,” huffed Marca. Thankfully, FFT has never been held up to such high journalistic standards. We consider it a good week if we don’t get sued. Or successfully dress ourselves on three or more days a week.

Away from the CR7-Bale hyperbole, the much more significant news is that Ancelotti can count on fit-again first-choice midfield pair Toni Kroos and Luka Modric to play alongside Isco, who has probably been Madrid’s best player in the last three months.

In Catalonia, life is looking pretty rosy. Barça’s attacking trident of Lionel Messi, Luis Suarez and Neymar has really clicked into top gear in 2015, despite the truly appalling MSN nickname. Being called after a borderline defunct communications platform isn’t the greatest moniker to wear.

Messi, in particular, is flying. Seventeen goals in the calendar year already, he’s settled back into his right-wing position, from where he has the freedom to roam as he sees fit.

Let’s face it, though, you know most of this already. You know who’s going to play, you know it’s going to be feisty, you know Pepe’s going to do something stupid, you know players are going to roll around a lot.

Sit back, eat jamon serrano, drink San Miguel and enjoy the ride, because the Clasico is a game like no other. Plus, you’ll be able to see the whole game this time, unlike October’s fixture when Sky Sports missed Neymar’s opening goal because of the 2:45pm to 5:15pm live football blackout.

Sergio Busquets faces a race against time to make Sunday’s game due to his injured ankle. If he misses out, expect Javier Mascherano to fill in, with Marc Bartra partnering Gerard Pique in central defence. Dani Alves is set to return from suspension at right-back. Kroos and Modric should both start, meaning James Rodriguez is the most notable absentee with a broken foot.

Given the constant position switching of Barca’s front three, it’s difficult to pick a specific confrontation that will definitively affect the game’s outcome, but how Madrid deal with the Argentine is as good a place to start as any. Messi was relatively quiet in the first Clasico of the season, Madrid proving much more clinical going forward, while Messi, Suarez and Neymar frequently got in each other’s way in their first game together. Now used to playing from the right-wing position where he started his Cule career, Messi and Suarez have linked up to great effect. Defensively, Marcelo is much improved in the last two seasons, but must maintain his occasionally-wandering concentration to keep those two in check for 90 minutes.

Who’d be a coach of either of these teams? Any defeat immediately puts you under the most intense of pressure. Barcelona may be top, but Luis Enrique has been up against it all season. Truly despised in the Spanish capital – Blanco fans claim he took advantage of a club holiday to have a medical with their eternal rivals – he’ll enjoy a better reception than at the Bernabeu earlier this season. Ancelotti may be under fire, but there are few coaches who could steer the Real Madrid ship with as few broken egg shells as the former AC Milan and Chelsea boss.

ONE-ON-ONEEnrique: "I’d like to manage in England at some point. My wife wouldn’t like the weather, though"

If Perez does hit the ‘sack’ button in the summer, he’ll do well to find another manager who could perform such an avuncular role. After all, not even the Special One could manage it.

These are impossible to predict, but for the sake of argument, a pulsating 2-1 Barca win.

Fancy a bit of pre-Clasico reading before the big game? Pick up or download the latest copy of the magazine now for exclusive interviews with Messi, Bale and James Rodriguez, plus find out what makes Suarez tick by the people who know him best. Available in print and in a specially-designed-for-iPad edition.