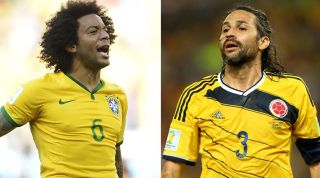 The shifting balance of power in South American football.

Showmen, the great entertainers, The Beautiful Game's heartbeat: these are a few of the accolades that have been lavished on Brazil in recent decades. and with good reason, too. Historically, they've played some of the most attractive football on the world stage.

Not anymore. So far, Colombia have been the highlight of Brazil 2014, dismantling their opponents with high-tempo pressing, pacey counter-attacks and, in the likes of James Rodrgiuez, one of the most savvy technicians in the game. His goal against Uruguay at the weekend was an example of just how unstoppable Jose Pekerman's men can be.

Brazil, on the other hand, have delivered in flashes without exploding into the football force the watching world wants them to be. Neymar has dragged them through the tournament until now, but there have been too many lacklustre performances from players who dazzled during the Confederations Cup last year - midfielder, Paulinho (dropped for their second round tie) being the guiltiest culprit.

Against Chile - another of South America's emerging powers - Brazil looked nervy; a unique pressure that arrives with being the host nation weighed heavily. They will have to toughen up, particularly in the full-back areas, if they're to profit here.

"Millions of Colombians took part in spontaneous and euphoric celebrations after their national team - for the first time in soccer history - reached the quarter-finals of the World Cup.

"The celebrations broke out just before 5pm local time after the whistle blew for Colombia-Uruguay in which Los Cafeteros convincingly won a ticket to compete with Brazil, who earlier in the day beat Chile. Following the final whistle, tens of thousands of Colombians took to the streets and drove around waving flags and balloons, while blowing horns and spraying foam, amid blasting stereos." - TodayColombia.com

"Not by much, but Brazil’s World Cup dream remains alive. After a 1-1 draw against Chile following 120 minutes of grueling football, the hosts prevailed after a nerve-wracking penalty shootout. And the man to convert the winning penalty, ice cool under the glare of 170 million people? Neymar?

"While he saved Brazil’s bacon once again, a trend is beginning to emerge. Brazil, for all the talent they possess, are far too reliant on their No. 10. Chile are hardly a team packed to the rafters with superstars. Alexis Sánchez is their standout performer and, on paper at least, Brazil should have had too much for their South American neighbours." - Rio Times Online.

James Rodriguez grabbed the headlines against Uruguay with his Hotshot Hamish-style volley (a shoo-in for Goal of the Tournament, surely), but it's attacking midfielder Cuadrado who makes this team tick. Combining pace and muscular strength with quick-footed trickery, he has bamboozled full-backs throughout the tournament, delivering 4 assists and 1 goal of his own.

Against Marcelo he could enjoy another field day. The Real Madrid left-back has looked defensively suspect all tournament, often being caught out of position; he has a worrying tendency to get on the wrong side of his man when tracking from a midfield area. If he doesn't buck his ideas up, Colombia could run Brazil ragged.

Colombia to sneak through, though this tie will go right to the wire. Penalty shootout!