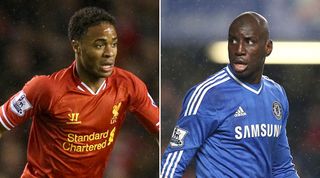 The game Liverpool really want to win and Chelsea really can’t be arsed with.

Or so Jose would have you believe. According to The Not Especially Happy One, Chelsea are going to turn up on Sunday and field a few kids, a couple of duds not quite good enough for the first team and anyone not eligible for the return leg against Atletico Madrid.

He’s even got permission from the club to slack off (which we like to imagine was granted in the form of a hastily scrawled handwritten note from Roman Abramovich, before being proffered to the Premier League).

The pre-match propaganda, if to be believed, suggests Chelsea don’t really care about this game; the league is already lost. “It’s all yours Liverpool, we don’t want it. We’ve got bigger fish to fry.”

Hah, but wait… you almost had us there, Jose. In this year’s race for the title, the contenders have been falling over themselves to nominate someone else for top spot. The idea being that this would remove the pressure to win and heap it on someone else.

Mourinho has taken this tactic to its logical, almost suicidal extreme. A huge gamble when you consider that it’s Chelsea who need three points; a draw would be perfectly acceptable for Liverpool.

But the trouble is that to win games you need more than the absence of expectation, you need to score goals. And that, as everyone knows, has been Chelsea’s undoing. As it stands, the Blues have scored 29 goals fewer than Liverpool; pretty much a neat, Luis Suarez-shaped shortfall. What they do have, though, is the league’s meanest defence, only conceding 26 times. And in a strange sort of way, this might offer Chelsea a route to victory, with defence the best form of attack.

In recent home games, Liverpool have blown the opposition away in the first 20 minutes. If Chelsea can repel the early red onslaught, they will fancy their chances of scoring against a back-five that gets all jittery in the second half, as they demonstrated against Manchester City and Norwich. Yes, of the top two sides in the country, one struggles to defend, the other to attack.

For Liverpool, attacking is less a problem and more a force of nature. In Suarez, Raheem Sterling, Philippe Coutinho and Daniel Sturridge, Brendan Rodgers has a creative quartet that offers a little bit of everything from pace, guile, tenacity and a ruthless efficiency in front of goal. Perhaps just as impressive – and this is where credit goes to the work Rodgers does in training – is their ability to interchange positions. No attack in the Premier League is quite as fluid as Liverpool’s, the confusion this creates leading to goals. Lots of them. Repeat the trick against Chelsea and Liverpool will have all but won the title.

For the home side, Sturridge (hamstring) has told some children on Sky Sports News that he’s set to return for this game, which is good enough for us. Chelsea’s back-line, meanwhile, have been ravaged by a bout of David Luiz. Petr Cech (David Luiz) is out for the season, while John Terry (David Luiz) could miss the rest of the league season, only returning should they make the Champions League final.

Chelsea need to score and that task may very well fall to the Senegalese striker. The Blues’ last two away games saw them lose 1-0 to Crystal Palace and win 1-0 at Swansea. One of the key differences between fixtures was that Fernando Torres started the game against Palace, Ba against Swansea. At the Liberty Stadium, Ba offered a central presence, staying in and around the box. This not only led to his goal, but meant attacking midfielders Mohamed Salah, Willian and Andre Schurrle had someone to aim at. Against Palace, Torres picked the ball up in deeper positions, which left no one in the box. What the last few weeks have shown is that the one thing you need to do against Liverpool is maintain a threat in the box. Do that and you might just score.

Perhaps it’s because they’re friends following Rodgers’ time at Chelsea, but you can’t help but feel that when it comes to clashes between the sides, Mourinho is holding back. While Wenger (again) and Pellegrini (again) have felt the sharp end of a Mourinho barb this year, it’s all been a bit pally between the two former colleagues. Whether this remains the case next season should Rodgers guide Liverpool to the title, remains to be seen.

Chelsea stifle the life out of the game, but Liverpool get what they want and avoid defeat. 1-1.