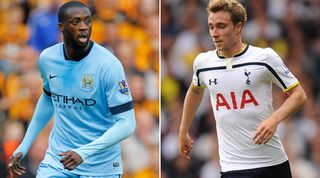 A tale of two wannabes: Spurs for a seat at the Champions League banquet; City for something much grander.

Never had the football chant rung so true as when, during the January freeze, Manchester City's support enquired as to whether their team could play Spurs every week. The Blues slapped their opponents twice during the 2013/14 campaign - one a  5-1 drubbing, the other a 6-0 whitewash. In their past six meetings, 30 goals have been scored and Spurs have only got eight of them.

Not a year on, City's creative exponents will be licking their lips here. Still, they haven't quite clicked in they way they would have liked (a way like Chelsea have, for example) and Manuel Pellegrini's remain five points off top spot while much speculation has surrounded their midfield power source Yaya Toure, who has looked indifferent at best.

There are other question marks, too. Despite having scored late on to secure a vital 2-0 away win over Aston Villa before the international break, Match of the Day's Alan Shearer - a pundit whose analysis usually only extends to the drab retelling of a slow-motion action replay - claimed City had been 'full of errors'. "I think they felt they just had to turn up and they'd win but that doesn't happen in the Premier League," he droned. "It was about winning and getting three points and they did it, but I didn't think they played well."

The big question for Spurs is this: have they turned the corner? Against West Brom and Liverpool at White Hart Lane earlier this season, manager Mauricio Pochettino experienced the type of frustrations last seen during AVB's crumbling "project".

The first being Spurs' inability to break down inferior opponents. The second, their embarrassing exposure to counter-attacking football while pressing high up the pitch.

There have been encouraging signs, however. More recently against Arsenal and an impressive Southampton team, Pochettino passed big tests: Spurs drew with their hated rivals having gone a goal ahead; Saints were dispatched 1-0 with a flash of brilliance from midfielders Nacer Chadli and Christian Eriksen.

Maybe his tactical penny has finally dropped with a squad bubbling with potential. Still, Spurs will need to be at their very sharpest at the Etihad if they're to gain anything here.

At City, Samir Nasri is still sidelined following groin surgery last month but is due back in training soon, while Eliaquim Mangala misses out with a minor muscle injury. For Spurs, there has been talk of England full-back Kyle Walker closing in on his return to action, though he's still a few weeks away. More worrying is the news that Pochettino is "sweating" on the fitness of Chadli and goalkeeper Hugo Lloris.

City's creative force is a player in exquisite form. Despite the recent shock of Spain's 2-1 defeat to Slovakia during Euro 2016 qualifying, Silva scored and arranged another during their 4-0 win in Luxembourg.

He looked in dynamic spirits against Aston Villa, too. And such is his mood that former Liverpool defender Jamie Carragher recently opined that: "Silva is an education in how to find space and receive a pass." If he can unshackle himself from the attentions of Etienne Capoue - the man inevitably charged with protecting Spurs' back four from those inquisitive advances - he'll deliver plenty of chances.

Pellegrini spent much of his post-Villa presser defending the schizophrenic form of Toure. "Like every player he can have better games or not so good games, but I have never had any doubts about him," he said.

"Yaya has had a lot of different things happening in his private life, but when I spoke to him he did not have any problem with his commitment to the club and he did not want to go anywhere else. I think that was a misunderstanding."

Pochettino may feel his ideas are finally being worked into the Spurs setup, though former captain Ledley King believes the chance of a top-four spot could be beyond him this season. "There's going to be six or seven teams thinking they've got a chance of the top four," he said. "We are one of them but a lot of things would have to go right for us this season. But long-term we have the right manager. It is going to take a little bit of time for him to get his thoughts and methods across. But we're confident he is the right man."

Spurs to take another lesson. 3-0 to City.