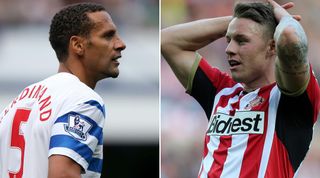 Played two, won zero - a chance for one team to chalk up a first victory in a game both sides will feel they can win.

Beaten by a resilient Hull on the opening day, ripped apart by a rampant Spurs the following week and now dumped out of the League Cup by Burton Albion at the first hurdle, 2014/15 has not been a bed of roses for QPR thus far.

Though Harry Redknapp's signings make for impressive reading on paper, a number of them are arriving in true Redknapp style: late in the transfer window. Consequently, it's hard to really gauge whether there is real cause for concern at Loftus Road at this stage, or whether these defeats are just the natural early teething problems of a promoted side looking to re-establish itself in the top flight.

The performances so far, however, have been worrying. If the 4-0 scoreline at White Hart Lane last week was bad enough, of greater concern to Redknapp will be the statistic that QPR saw just 34% of the ball on the day (to Spurs' 66% possession) and yet still covered less ground, despite being the team supposed to be chasing hard to win the ball back.

Such a statistic paints QPR either as a team lacking the legs for the race or, perhaps worse, lacking the desire. Supporters may look at the back three, see 34-year-old Richard Dunne and 35-year-old Rio Ferdinand and conclude the former. It would be a catastrophe if only two games into a new season the conclusion was the latter.

Of course it's early days yet and QPR may well gel into a cohesive unit. But the fact remains the west Londoners have won just four of their last 40 Premier League games. That win rate needs changing immediately, starting Saturday if Rs fans had their way. Otherwise it's going to be another long, hard season.

Sunderland are another team of winless wonders, but creditable draws at West Brom and at home to Manchester United means there's nowhere near as much reason to panic as their opponents.

The Black Cats also navigated their midweek League Cup game at Birmingham rather comfortably in the end, winning 3-0 with late goals from Jordi Gomez, Adam Johnson and Connor Wickham.

Gus Poyet has made a number of intelligent signings this summer, and it showed against United last Sunday as they fought their way to a well-earned draw. Will Buckley prospered down the right-hand side and Jack Rodwell scored the all-important equaliser, while Patrick van Aanholt has made a solid if unspectacular start to life at the Stadium of Light, grabbing an assist in the 2-2 draw at The Hawthorns.

On the evidence of the opening two games, Sunderland look a side with the resilience and ability to do much better than their season of squeaky bum time-turned eventual escape last year.

Sunderland have won three of their last four trips to Loftus Road dating back to 2005 when Andy Welsh, Chris Brown and Julio Arca gave them all three points while in the Championship. A similar result would not go down well with Redknapp, who already slammed his players as 'not good enough' after the Burton debacle.

Charlie Austin is a doubt for QPR having picked up a hamstring injury after the opening day. Eduardo Vargas is also ineligible while he awaits news of his work permit - a shame for QPR as his energy and injection of pace and guile in forward areas is just what they need. The desperately unlucky Alejandro Faurlin is out for another six-nine months after sustaining a third anterior cruciate ligament injury in the defeat to Burton.

For Sunderland, Poyet has that most rare of treats ahead of this weekend - a fully-fit squad to choose from. Whether he keeps Buckley in the side or restores Johnson to the first team will be interesting to see.

The former Manchester United star is finding his feet at Loftus Road having moved back to the capital after 12 years 'oop norf, but it's fair to say he hasn't made the best of starts on his return to London life. Ferdinand - as with the other defenders around him, in fairness - has struggled to adapt to Redknapp's new 3-5-2 system thus far and looked leggy up against Mauricio Pochettino's spritely Spurs in that 4-0 defeat last weekend.

This Saturday he'll be up against both Steven Fletcher and Wickham, who's been deployed in wide areas by Poyet so far this season but loves to cut inside and head for the penalty area whenever Sunderland are on the attack. Wickham completed 4/4 dribbles against United and scored his first of the season in midweek, so confidence will be high. He has a good physical presence and is useful in the air, so Ferdinand will have to be quick on his feet and strong from set-pieces to thwart the threat posed by the Hereford-born striker.

"Why does everybody hate Harry?" was the cover story of our last FourFourTwo Football Weekly. In a thought-provoking piece, James Maw looked at the reasons behind Redknapp's sharp drop in popularity from everybody's favourite for the England job to the caricature he is today.

Unfortunately, Redknapp did little to dispel the perception that he's out of touch last weekend when, at 4-0 down, he responded to Spurs fans' cries of 'Harry Harry give us a wave' BY ACTUALLY WAVING.

A heinous crime in the eyes of some QPR fans. "I don't know which fans are sitting up where, do I?" responded Redknapp, who managed Spurs for four years, post-match. The man continues to divide opinions, and having been booed by his own fans he'll need to be on his best behaviour come Saturday.

As for Gus Poyet, well he's just lovely, isn't he?

More misery for the men in hoops. 2-1 Sunderland.