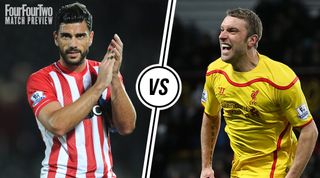 Can the Saints go marching towards the Champions League? Or will the Reds walk all over them?

Are Southampton stalling? Just one win from their last four games suggests they might be. It would be a shame: while the rise of their upcoming opponents was arguably the most compelling story of last season's Premier League, the Saints have been this season's biggest surprise package, a side who picked up the pre-season script predicting post-mega sale doom, ripped it to pieces and fearlessly set about carving out their own destiny.

With 13 games remaining, that Ronald Koeman-inspired swagger had looked like taking Saints all the way into the Champions League. But the recent dip in form now has them looking over their shoulders at a hungry chasing pack consisting of Arsenal, Liverpool and Tottenham - teams who know their way around the finer contours of this top four racing track and have years of experience. Sunday's game could well be a defining hurdle.

Of all the runners, Liverpool currently look the freshest. The Reds have built up a nice, rhythmic momentum, with just one defeat from their last 16 games - and that in extra-time at Stamford Bridge. In Brendan Rodgers' entire time at Liverpool since joining in 2012, the Reds have suffered just four league defeats between January and May - a remarkable indicator of just how the Northern Irishman operates as the season progresses.

He stutters, he tinkers, he experiments, he gets it right, finally, and his team sprint off into the distance.

History is repeating itself in 2014/15 and, utilising Rodgers' new 3-4-2-1 system, everything has clicked into gear. Victory at St Mary's would propel them ever closer to a top four spot at just the right time.

Liverpool have a mixed record from trips to Southampton in recent years, winning two and losing three of their last five meetings. Last season Luis Suarez helped blow the Saints away, but Southampton are made of sterner stuff these days, boasting the league's best defensive record. Whoever claims this particular three points will in doing so be making a huge leap towards their end-of-season target.

Southampton have a number of injury worries, a major contributing factor to their recent dip in form. Toby Alderweireld is likely to miss out again here with a hamstring injury, Jay Rodriguez, Emmanuel Mayuka and Sam Gallagher are all out, Shane Long is a doubt with rib trouble and Ryan Bertrand is suspended.

Having enjoyed just 30 minutes of league action in a month, Morgan Schneiderlin is on the mend but still not 100% fit. For Liverpool, Lucas (groin), Brad Jones (thigh) and Jon Flanagan (knee) are absentees, with big doubts hanging over the availability of Steven Gerrard (hamstring) and Raheem Sterling (foot).

It would be fair to say that Tadic has adapted pretty well to life in England's top flight. One of the Premier League's top three assist providers, Tadic has been a terror in wide areas for the Saints, his wand of a left foot carving chances and helping him to important recent goals against Arsenal and Manchester United.

His ability to drag opposition defences out of shape will test Liverpool's new three-man backline, and if deployed down the left wing as he often is by Koeman, Tadic will likely be in direct competition with Liverpool's man of the moment Emre Can.

Can was nominated for Premier League Player of the Month in January, and the manner in which he's adapted to a position to the right of Liverpool's three-man central defence has been outstanding.

An imposing athlete with a touch of regality about him and the way he struts about the park, Can was superb when pushed into midfield against Spurs. His bursting runs forward after Rodgers switched him to central midfield provided the drive that helped propel the Reds to a 3-2 victory.

"He's got a big future here, Emre," Rodgers has swooned. "He is an outstanding footballer and is a very, very young player who is just acclimatising to the game here." The 20-year-old looks like he could be a key player not only this weekend against Southampton but for many years to come at Anfield.

ANALYSIS From can't to Can: How Liverpool's young utility man became vital for Rodgers

Koeman's incredible job at St Mary's has been praised by the club's chairman Ralph Krueger this week, who claimed he "didn't interview anyone else" after meeting the straight-talking Dutchman (is there any other kind?).

"It was his straightforward honest approach that appealed," Krueger commented.

"He has backed everything up that he spoke about." Koeman has revitalised the club, reducing what was a highly progressive Mauricio Pochettino era to all but a distant memory for many Saints fans.

Tactically, Koeman and Rodgers are two of the league's most thoughtful and interesting to watch, so Sunday's game should be very entertaining from that perspective.