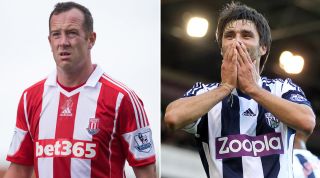 Some clubs enjoy international breaks more than others. After an eye-catching August, Stoke ran out of steam after September's caesura and lost their last three before this most recent break; by contrast, West Brom followed the Di Canio-killing Sunderland slapfest with two fine performances at Manchester United and at home to Arsenal.

The Potters' assistant boss Mark Bowen insists Stoke will stick with their new style, but the fans at Fortress Britannia can be an unforgiving bunch and Mark Hughes's side have only scored one goal in four league games.

Moreover, Stoke usually start poorly: they have the Premier League's worst first-half record, they've only opened the scoring in one game, and have allowed the opponents first blood in five of their seven league games. After encouraging early results, the Hughes revolution appears to be hitting a sticky patch, and fans accustomed to direct intervention may not have infinite patience with the Potters' pitter-patter of tiny unpenetrative passes.

Games between Stoke and West Brom are rarely free-flowing high-scoring affairs, and you wouldn't back this one to buck the trend. Steve Clarke, whose side are yet to lose on the road, may take advantage of the uncertainty at the Britannia by setting his team out to stifle Stoke early on, while looking to the likes of Nicolas Anelka, Stephane Sessegnon and Saido Berahino to inflict misery up the other end. It may not be pretty, but it's effective. Call it the Pulis paradigm.

Stoke have an almost clean bill of health, with their only worry being Jon Walters' ongoing groin gripe. By contrast, West Brom await word on Victor Anichebe's groin and Scott Sinclair's hamstring, although Czech striker Matej Vydra has declared himself in "perfect shape" – which makes him, according to ancient geometry scholars, a circle.

Having seen his old boss Roy Hodgson employ fresh faces – and struggle for depth at right-back – Billy Jones might dare to dream of adding a full international cap to his England U16, U17, U19 and U20 honours.

A quietly essential part of the Baggies back-line, the Crewe Academy graduate held his own against Manchester United and Arsenal, and won all five tackles at Everton – while at Fulham, no West Brom player made more attacking-third passes.

Former Chelsea team-mates born barely two months apart in late 1963, Mark Hughes and Steve Clarke have taken very different managerial paths. Having spent years soaking up knowledge as an assistant manager, the Scot has only just reached 50 games as gaffer, whereas the Welshman is closing in on 400.

The pair have only faced off once as head honchos, at The Hawthorns last October. Hughes's QPR were on a shocking run, while Clarke's West Brom were unbeaten and unbreached in three home games. True to form, the Baggies beat the Hoops 3-2, and within six weeks Hughes was sacked.

Stoke's stutter becomes more pronounced as West Brom rope-a-dope them into a 1-0 home defeat, promoting a light smattering of boos at the Britannia.