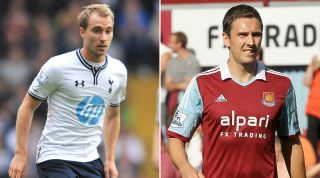 A one-sided London derby both sides could do with winning.

Grab that megaphone and then shout it from the rooftops: Tottenham are looking like proper contenders at the top.

After winning four and losing just one of their first six Premier League games of the season, Andre Villas-Boas’ side are sitting pretty in third (though still, as obliged, behind leaders Arsenal) and threatening to stay put.

Last weekend’s draw against Chelsea threatened to be even better after Gylfi Sigurdsson nudged the hosts ahead inside 19 minutes, only for Juan Mata’s half-time introduction to help Chelsea earn a point.

For Spurs to truly kick on, however, they’ll need to find their shooting boots. They’ve only bagged six in as many matches despite enjoying (or enduring) an average of 19.4 efforts on goal per game. Two of their goals were penalties, too.

At the other end, though, they’re the Premier League’s stingiest lot and now face a West Ham side struggling just above the drop zone.

Sam Allardyce’s scrappers haven’t won since the opening day, can’t score without Andy Carroll and currently appear about as comfortable in possession as a drug lord at the sound of sirens.

When goals do trickle though they come from midfield – the Hammers’ strongest area and one they’ll likely look to dominate at White Hart Lane. If Kevin Nolan, Mo Diame and Mark Noble can get it together then the visitors might just find some joy. It looks like an uphill struggle, though.

Danny Rose (ankle) is back in contention, while Aaron Lennon (ankle) isn’t too far away from a return to action having not played since the opening day.

Etienne Capoue, meanwhile, is still nursing a similar problem, picked up in the North London derby, while Younes Kaboul is a doubt with a knock picked up in the midweek Europa League win at Anzhi.

If there’s one thing Spurs aren’t short of this season, it’s creativity. The Londoners quickly forgot about Gareth Bale by snapping up Erik Lamela, Nacer Chadli, Capoue and, perhaps most intriguingly, Eriksen.

The 21-year-old has settled quickly under Villas-Boas since his £8 million switch from Ajax, grabbing an assist on his debut against Norwich before netting his first goal – brilliantly – against Tromso in the Europa League.

Roberto Soldado needs service to operate, that much is clear, and it’s why Eriksen & Co. are so important.

Against Cardiff he was almost flawless in the final third, but the man aiming to knock him off his stride this weekend is West Ham’s Noble. As the deepest of the Hammers’ three central midfielders it’ll be his job to nullify the threat of Spurs’ exciting youngster. The captain needs to keep his cool, though – against Everton he gave away four fouls and was sent off as his side blew a 2-1 lead to lose 3-2.

Villas-Boas and Allardyce have faced off just twice before – and the latter is yet to pick up a point against his Portuguese counterpart.

Spurs romped to a comfortable 3-1 win at White Hart Lane in this fixture last year, before Bale’s brilliant late winner grabbed a 3-2 victory at Upton Park.

Anything other than a convincing Spurs win would be a big surprise. 3-0.