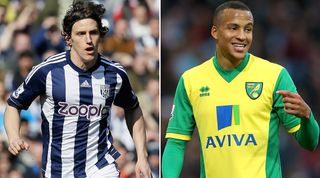 The game Soccer Saturday will give to John Salako.

Does Chris Hughton believe in his team? It sounds like a harsh question, but itŌĆÖs one Norwich supporters may ponder as they look nervously at the league table.

Their biannual shellacking by Liverpool was the latest example this season of the charcoal-haired manager setting up his team to make life hard for a talented opposition, only to throw in the towel after a quarter of an hour.

Now, it isnŌĆÖt easy to face an in-form Luis Suarez (West Brom can sympathise, being the other victims of a Suarez hat-trick this season), but rarely has a team looked so doomed from the moment they concede the first goal. ThatŌĆÖs when a team must battle. And against big teams, Hughton isnŌĆÖt looking like a man with a fight in him.

ItŌĆÖs hard to know what to make of West Brom at the moment (except the anagram ŌĆśweb stormŌĆÖ). Steve ClarkeŌĆÖs men are scoring goals ŌĆō nine in their last five ŌĆō and playing without fear, beating Man United and drawing with Arsenal and Chelsea.

But theyŌĆÖve been slipshod of late, the only win in their last eight outings coming against a feckless Crystal Palace side. In fact, theyŌĆÖre only a point above Norwich.

Conceding to unstoppable strikes and the odd dodgy penalty, itŌĆÖs partly been bad luck thatŌĆÖs put the Baggies as low as 13th, but at the same time their defence has been leakier lately than Bayern MunichŌĆÖs dressing room, shipping 13 goals in six games.

This is the beginning of a gentle run-up to Christmas ŌĆō Norwich, Cardiff, Hull ŌĆō so a clean sheet and a win could make for a nice leg-up.

Boaz Myhill continues to play for a Wales place in sticks as West Brom No.1 Ben Foster sits on the sidelines. Nicolas Anelka should return and Scott Sinclair is in line to play the team heŌĆÖll probably sign for next summer. ThereŌĆÖs still no Thorne in the side, as young midfielder George nurses his ACL injury.

The visitors are without record signing Ricky van Wolfswinkel and long-term absence Elliott Bennett, as well as Alex ŌĆśouchy ankleŌĆÖ Tettey and the Dickensian-named trio of Mr Bunn, Mr Pilkington and Mr Snodgrass.

RedmondŌĆÖs recall to the side has been a bright spot for Norwich fans, the winger showing attacking intent against opposition full-backs while also putting in his fair share of tackles. Redmond created 4 chances in the defeat to Liverpool, including the assist for Bradley JohnsonŌĆÖs headed goal, and against Crystal Palace he put in 18 ŌĆō EIGHTEEN ŌĆō crosses as well as winning all 5 of his attempted tackles. A successful duel with Steven Reid could be vital to NorwichŌĆÖs chances of a win.

Criticising Hughton is a fast-track to feeling guilty, because as we all know, heŌĆÖs a Lovely Bloke. But he is under pressure for unambitious performances after spending richly in the summer. Norwich have lost their last five away games, conceding 22 goals ŌĆō one every 20 minutes. Hughton wonŌĆÖt admit to feeling pressure, but thereŌĆÖs a canary-yellow spotlight on him right now. Steve Clarke, on the other hand, has said thereŌĆÖs ŌĆ£a little bit of pressureŌĆØ on Albion after back-to-back defeats. The consecutive 2-2 draws with Chelsea and Aston Villa, both of which should have been won, are still hurting. Much will depend on whether he treats the wounded Canaries with caution or goes in for the kill.