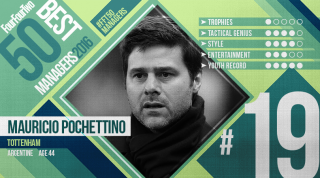 It could be argued that Mauricio Pochettino is a manager out of his time, as the fundamentals of his approach are all rooted in simple principles.

At its most vivacious, his brand of football may possess a satisfying technicality, but its core is reliant on old-fashioned hard work and on players operating at the extent of their physical limitations.

Modern football teams are build around more than just a single governing philosophy, of course, but Tottenham – as Southampton were previously – have been predominantly reconstructed from honesty. The club's players have become more accountable to each other than at any other point during the modern era and, though individuals have risen from inside the group, their reputations are the product of a collective movement.

If Spurs were previously the team of isolated, flawed class and associated with style rather than substance, then Pochettino's biggest triumph has been to give them a proper texture.

There's a voodoo to his work. It's a slight cliche, but every technical aspect of his management relies on his personality. He is evidently someone with a magnetic quality and his ability to alter players' habits is dependant on the same intangibles.

It's one thing to preach the importance of conditioning and the primacy of teamwork, but it's quite another to enact that change; the modern professional is neither notoriously selfless nor typically receptive to prompts for self-improvement.

But perhaps Pochettino's biggest achievement during the English leg of his career, the factor which truly marks him out among his peers, relates to the number of careers he has been able to change.

At St Mary's, he progressed Adam Lallana and Jay Rodriguez to levels which were never considered possible, and helped to chisel Luke Shaw into a player who Manchester United would eventually spend £30m on.

At White Hart Lane, those transformations have been even more dramatic. Though an evolution for which others claim responsibility, he was the true catalyst in Harry Kane's career and helped to add the layers to his goalscoring which have subsequently made him an England international.

Similarly, the emboldening of Danny Rose is one of his most pronounced successes: a fragile player whose defensive naivety bred deep supporter mistrust has evolved into England's first-choice full-back. Eric Dier has been reinvented, Erik Lamela's career has been resurrected, and Kyle Walker has matured beyond all recognition. Pochettino even managed to wrangle Mousa Dembele's talent and turn him from a player most fans would happily have seen sold to one who they dare not be without.

The proof of the Argentine's progress is in the literal improvements recorded in the league tables and in the stingy defensive statistics, but his real worth is evidenced by the culture which he has been able to create.

There are several non-footballing reasons why Tottenham now radiate with organic health, but Pochettino's command over the north London atmosphere has been the centre-point; he has been a tactician, a motivator and, most pertinently, has exorcised many of the emotional demons which haunted the club's corridors for decades.