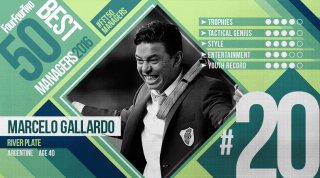 He might have won four international titles with River Plate in just one year (including two where his side eliminated bitter rivals Boca Juniors), but El Muñeco (The Puppet) – just 40 years old – is still South America’s most 'promising' manager.

The reason is simple: rather than resting on laurels of glory days (and there are many of those in his short career), Marcelo Gallardo’s full potential is yet to be seen – his eagerness to win is supreme, but also to change and improve his team’s game.

“We shouldn’t forget that River have suffered quite a lot in the last seven years, and there’s the chance to making things right in the academy, taking the club to the next level – the level where they belong,” he said.

Obsessive, and a perfectionist who is focused on game development, tactics and psychology, Gallardo was often compared to Pep Guardiola: they were both born on January 18, only Gallardo is five years younger.

This season started with an unforgettable Copa Libertadores triumph, but as focus switched to the World Club Cup in Japan (they reached the final and lost to Barcelona 3-0), the team suffered the departures of key players: Ramiro Funes Mori, Matias Kranevitter, Carlos Sanchez and Teo Gutierrez were difficult to replace.

Yet the new River challenged again, reaching the semi-finals of the Copa Sudamericana in November 2015 and being eliminated by underdogs Independiente del Valle in the Libertadores this year, despite creating 20 clear chances – most of them saved by the brilliant goalkeeper, Azcona.

They were out, yet River and Gallardo received a standing ovation for such a display. The team had already changed: Gallardo proved that he had no strings attached with a tactical system; his true commitment is with the idea of pressing the opposition, having the ball and trying to attack using all available resources.

Leader of the revolution

Now that Marcelo Barovero (Club Necaxa), Eder Alvarez Balanta (Basel) and Leonel Vangioni (Milan) have also left the club, it’s time for a serious rebuild – the perfect opportunity to see if Gallardo can really come up with an even more modern operating system for his side.

His low-cost signing policy had started well, yet the most expensive arrivals didn’t perform as expected. With sights set on big investments, Gallardo’s hope is to rediscover the traditional River style, something that had to be sacrificed to take advantage of the existing players.

Results – notably better than expectations – speak for themselves, but Gallardo wants more than that.

“Marcelo is a natural born-winner, but on top of sacrificing he always underlines that you don’t win by putting an evil face on an opposition player, instead playing better football,” recalls Alvaro Recoba in Gallardo’s biography, 'Gallardo Monumental'.

There seems to be unanimous agreement: he is a man capable of leading a revolution. Winning so much, so early, has only helped him to cement his reputation. But the real work is about to come.

Whether that revolution will take place at River, the Argentina national team or elsewhere, remains to be seen. But those who dubbed Gallardo ‘South America’s Guardiola’ were not exaggerating.