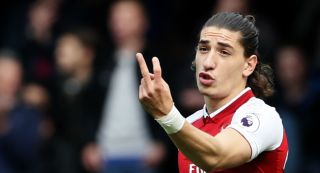 Bellerin has laughed off Morgan's disgruntlement that Corbyn intentionally switched a conversation with the Arsenal full-back to Spanish, in order to block out the TV rent-a-gob.

Corbyn, whose wife is Mexican, shunned Morgan at the GQ Men of the Year awards as the Good Morning Britain host approached the duo.

Morgan describes how he had been seated with Bellerin during the evening, and how they had been chatting about the Gunners’ current form.

“Later, fellow Arsenal fan Jeremy Corbyn came over to speak to him," Morgan parped. "When I tried to interrupt, the Labour leader promptly switched to fluent Spanish to shut me out of the conversation.”

(Let's not dwell too much on the "When I tried to interrupt" bit, eh?)

Morgan's remarks drew Bellerin and Corbyn into agreeing on Twitter that they wouldn't divulge where their conversation led them after that point in time.