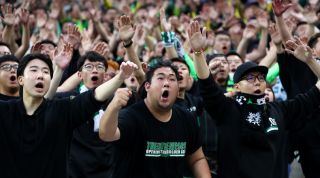 The heat. That’s all I could think about walking down the long stretch of road that leads from Dongsishitiao subway station to the north gate of the Beijing Workers’ Stadium (known to locals as Gong Ti). A quick check of the phone shows the temperature to be an eye-watering 34 degrees. It’s 5.30 in the evening.

The tree-covered footpath at least offers some respite, amidst the noticeable swelling of green and yellow clothing and ticket touts desperately shouting numbers to potential buyers. In an age where touts are increasingly rare, certainly in Western Europe, it’s remarkable to see them operate here with impunity, with each tout holding stacks of tickets.

Despite my primitive understanding of Chinese, I hear a 90 yuan (£10) proposal from a tout to a local, and a few steps later another reassuring a foreigner that 200 yuan (£23, roughly) is a very good price to watch league leaders Beijing Guoan take on Shanghai Shenhua.

The walk to the stadium could be best described as business-like. Street vendors hustle to sell Guoan merchandise. There is nothing in the way of the singing or chanting of names that is sacred in English football. It felt like a typical day in downtown Beijing.

Entering through the north gate, I’m shuffled over to the right hand side by stewards to receive my ticket. Documentation is provided, checked and ticket issued. After walking past two famous Beijing nightclubs (the imaginatively titled Vics and Mix), both situated inside the complex, and going through five – yes five – security checks, a view of the pitch is glimpsed.

The Worker’s Stadium is an aesthetically brutal structure. Built in 1959, its concrete-bowl shape is reminiscent of the stadiums that punctuate Italian football. It’s a no-frills, rough-around-the-edges arena. Making my way to my seat, I nudge past a family of three tucking into KFC.

The match is a middling affair. Renato Augusto, formerly of Bayer Leverkusen and Corinthians, takes control of the match from the beginning. Augusto, capped 32 times by Brazil, gives the impression of a university student who’s decided to play with primary school kids just for the sake of it. He comfortably plays within himself and strolls around, popping up wherever he takes fancy. His fantastic curler puts Guoan 2–0 up after Piao Cheng opened the scoring.

The best action, however, comes from the section below. Known as ‘Yulinjun’, these are Guoan’s self-styled ultras, dressed in matching black T-shirts with a leader that faces away from the pitch. They sing and wave flags throughout the 90 minutes. Other factions – once united in a group called ‘Green Hurricanes’, before splintering in the mid-2000s – are dotted along the east and west stands, sporadically breaking out into song. But it is the Yulinjun that carries the atmosphere.

A smartly taken volley from Shenhua in the last minute closes the gap, but it’s too late. Guoan now sit five points clear of Guangzhou Evergrande, who are managed by Fabio Cannavaro, and enjoy former Barcelona and Tottenham midfielder Paulinho dictating play.

Heading towards the exit, I walk past two fans wearing Bayern shirts. The natural reaction is confusion, but it’s common here to support two or more teams (or in the case of Cristiano Ronaldo, Neymar and Lionel Messi, individuals). Despite the sub-par quality, the thirst for the world’s most popular game in the planet’s most populous country is ever increasing, especially among children.

While the Chinese Super League has a long way to go to rival the European game on the pitch, its vibrancy off it doesn’t.