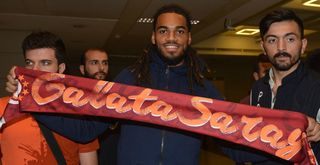 We all know Turkish fans are more passionate than most when it comes to their players (anyone who can recall Darius Vassell's welcome at Ankaragücü in 2009 will testity to that).

They also rather like their pyrotechnics. It's one thing seeing them in Galatasaray's stadium, but a whole other inside the confines of Ataturk International airport, where Belgian stopper Denayer arrived on Wednesday to sign for the club on a two-year loan.

The 22-year-old will now enjoy his second spell with the Turkish giants after spending the 2015/16 season on loan with them, when he made 17 appearances.

Denayer has also had loan spells with Celtic and Sunderland, but will be hoping to gain firmer footing in this longer stint in Turkey, with the aim of breaking into Pep Guardiola’s Manchester City side in the coming years.

Unfortunately for him there will be no European competition this season, after Galatasaray were shocked by Swedish minnows Ostersunds on their way to the Europa League.