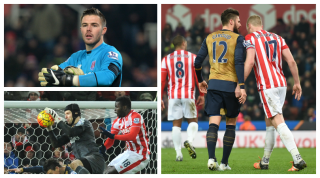 1. Goalkeepers come out on top in battle with strikers

Olivier Giroud had scored three goals in his last two matches for Arsenal to silence his critics, but the forward was unable to add to his tally due to the brilliance of Jack Butland. The Stoke shot-stopper was excellent as he showed his full range of attributes and why he must be part of Roy Hodgson’s squad in the summer.

He thwarted the striker in the 21st minute, as the England international spread himself to make the save. Shortly after the break he made a fantastic one-handed parry to push out Giroud’s free header from a corner.

“It’s early days for Jack, it’s only his first full season as a Premier League number one. He has started remarkably well in fairness, playing 20 odd games and in this game he proved what a good goalkeeper he is,” said Mark Hughes after the match.

It wasn’t only Butland grabbing the plaudits between the posts, as Petr Cech was equal to anything that Stoke could throw in his direction. The former Chelsea No.1 comfortably gathered a header from Joselu in the 35th minute.

The Spaniard had scored twice and assisted once in his last three league appearances for Stoke, but saw all four of his attempts on goal saved by Cech. “Petr Cech, as he has done for many years showed what an outstanding goalkeeper he is,” continued Hughes.

Both teams have plenty of pace in wide areas and with attacking full-backs on either side there was plenty of space for each winger to exploit. As Arsenal prefer to control matches this favoured Stoke, although the away club are certainly dangerous if given the opportunity on the counter.

With Xherdan Shaqiri missing through injury, Jonathan Walters was able to use his directness on the right-wing. Stoke’s speed on the break was probably most evident in the 56th minute, as the home team found themselves outnumbering the defence by four to three. Marko Arnautovic played in Walters but his shot was saved by Cech and Bojan almost squeezed in the rebound with the Arsenal goalkeeper reacting well to deny Stoke for a second time.

The relationship between Stoke’s full-backs and wingers showed, with Glen Johnson and Walters combining directly 15 times on the right, whilst left-back Erik Pieters made 13 passes to Arnautovic.

With Arsene Wenger entering the transfer market for the purchase of Mohamed Elneny this month, there must have been a few concerns from the Alex Oxlade-Chamberlain camp. The attacker started just his seventh Premier League match of the campaign, whilst he has witnessed Joel Campbell overtake him in the pecking order.

Oxlade-Chamberlain favours a central midfield role and with injuries to Jack Wilshire, Santi Cazorla and Francis Coquelin, he must have felt that now was his time to make a contribution in the position. Wenger opted for a 4-3-3 against Stoke, but when it did resemble more of a 4-2-3-1 it was noticeable that it was Aaron Ramsey that was pushing forward to play in-behind Giroud.

The 22-year-old went close in the 29th minute, as Butland tipped the ball over the crossbar, then a minute later he had another attempt this time with his left foot, as it was deflected wide by his own player Laurent Koscielny.

“He had some very interesting moments in the game, where he has shown his qualities,” confessed Wenger to the post-match press conference. “He can deal with pressure, pass people in the final third and in the future it can be a very interesting position for him.”

4. Afellay in a deeper position

Ibrahim Afellay made just his third start of the season as a central midfielder, with the former Barcelona winger normally used in one of the three attacking berths behind the striker. At the Camp Nou, the Dutchman struggled to make an impact as he was plagued by injuries, but he appears to have got over those problems in North Staffordshire.

Maybe his time sitting in the stands in Catalonia wasn’t a complete waste, as he looks to have learnt a few tricks from Xavi and Andres Inesta. Afellay was superb in the middle in possession and going forward, although he did suffer defensively. He failed to complete any of his four attempted tackles and made no interceptions.

However, on the ball it was a completely different story, as he completed 48 out of his 52 passes. Only Ramsey made more passes than Afellay, as he dictated the game for the Potters. His ability to dribble away from danger saw him bypass a couple of midfielders in a weaving run with just 10 minutes on the clock. Then, only 10 minutes later his shot from 25 yards narrowly missed Cech’s upright.

No one thought it would be easy for Arsenal, as they certainly don’t enjoy life at the Britannia Stadium. The Gunners have won just one of their eight Premier League games at the ground, with four defeats and three draws.

Stoke have already beaten Manchester United, Manchester City and Chelsea on home turf this season, so a draw is a commendable result for Wenger’s men. The Frenchman has also not defeated Hughes in his last eight league matches as the visiting manager.

“We lacked a bit of creativity to force the way forward and lacked the two or three good chances that you need to win a game like that,” admitted Wenger.

It’s inevitable that even a team of Arsenal’s capability will naturally find it difficult to foster opportunities, when missing their best three players and at a ground where they have historically struggled. It might turn out to be a point gained rather than two points lost, but Wenger will hope that the talent he has at his disposal will become more productive in the absence of their star performers in the long-term.

Analyse Stoke vs Arsenal yourself with Stats Zone