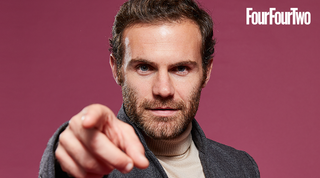 Much was made of the supposedly strained relations between the pair when Mourinho returned to Stamford Bridge in 2013.

Sure enough, the Portuguese tactician stuck to the narrative by shifting the Spanish schemer out of his side before selling him to rivals Manchester United the following January.

Two years later, Mourinho was appointed manager at Old Trafford – and Mata was in the crosshairs for pundits' concerns once more. But they needn't have worried, says the 29-year-old, who is adamant that no such thoughts were running through his own mind.

“What was I thinking?” Mata ponders in the January 2018 issue of FourFourTwo. “Firstly, that I had no kind of personal problem with him, no matter what the press said. And secondly, that I wanted to show what I could bring to the team, to prove myself.

“That was the important thing, to do your talking on the pitch. It’s a challenge in my career that I’m proud to have confronted head on.”

One of Mourinho’s first games in charge was the 2016 Community Shield at Wembley against Premier League champions Leicester. Mata was named as a substitute by Mourinho, but came on after 63 minutes to replace goalscorer Jesse Lingard.

In injury time, however, Mourinho substituted his substitute – which unsurprisingly led to stories resurfacing about the pair’s relationship.

“Yes, it did [frustrate me]," Mata admits. "In that specific moment, for that specific change, you’ve got to know Mourinho to understand his reasons.

“I’d come on after an hour, we were winning. There were six substitutions allowed and he had one left. He wanted to waste time and break the game up.

“He’s a pragmatist – he says so himself. So, his thinking is: ‘If they get the ball, they’re going to go long into the box. I’m going to take off the smallest guy’. That’s his reasoning. I understood it, because he’d told me what he was going to do before the change.

“Later on, because of what happened at Chelsea, the media digs up the past. I was happy because we’d won. His reasons for making the change were what they were, and I wasn’t going to question them. There was, and isn’t, any problem with him.”

We want you to know that we’ve launched a free young fans’ magazine, GOAL! It’s currently at the pilot stage, and comes with this issue, so we'd love to hear your thoughts: what do you like, what don’t you like and how often would you like to get a copy? The more we know, the better it will be

Read the full interview with Juan Mata in the January 2018 issue of FourFourTwo – an awards special celebrating the achievements of Harry Kane, Neymar, the Cowley brothers, Luka Modric, Lieke Martens, Ostersund, Emma Hayes and England’s youth teams. Plus, we recall 26 of the maddest managerial sackings of all time and enter the weird world of host families – providing a home from home for starlets in need of a place to stay. Order a copy here today, and then become a subscriber!

Grab it now: Available in print and on iPad and iPhone from Wednesday December 6. Subscribe to FourFourTwo here!