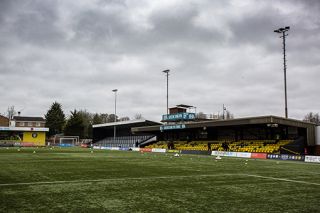 Had 2020 been any normal year, Harrogate Town’s Wetherby Road ground may well have been packed to capacity on Saturday, for arguably the biggest league game in the club’s history.

In only their second home match as a Football League club, the Sulphurites hosted Bolton Wanderers – still a Premier League side when Harrogate were on the way to relegation from the Conference North in 2010.

There were no fans in stands though, and the game wasn’t even taking place at Wetherby Road. What should have been a joyous occasion was instead a match of silence and decidedly mixed feelings, an hour’s drive south at Doncaster’s Keepmoat Stadium.

The government decision to keep football behind closed doors has affected everyone, but it’s fans of clubs like Harrogate who are being hit the hardest right now. True, Leeds United supporters are missing their long-awaited return to the Premier League, but at least they’ve been there before. For fans of Harrogate, this is uncharted territory. They will never get another opportunity to experience their entrance to the Football League, just as Wycombe Wanderers won’t have another first ever season in the Championship.

Brentford fans won’t get another chance to see the first game at their new stadium, or their last ever competitive match at Griffin Park. The same is likely to be true for followers of AFC Wimbledon, due to play their first fixture at the new Plough Lane on November 3.

All these treasured moments are quietly ebbing away, stolen by coronavirus and the regulations under which football now exists. In Harrogate’s case, their loyal fans had waited years for days like these.

Despite its hitherto lack of footballing pedigree, there is not one club in Harrogate, but two. When Harrogate Town made their debut in the FA Cup first round in 2002, they were overshadowed by their pesky neighbours. Town lost 5-1 at Farnborough, but Harrogate Railway Athletic triumphed at Slough, to set up a televised second-round tie against Bristol City on their own first foray into the competition proper.

Back then, Harrogate Railway Athletic played in the Northern Counties East League – the league they occupy today. Harrogate Town were two divisions above them in the Northern Premier League, and the gap has widened in the intervening years.

The club moved into the new Conference North in 2004 – five years later, they appointed 31-year-old former Lincoln and Doncaster defender Simon Weaver as their new player-manager.

Weaver’s first season didn’t go well – cash-strapped Harrogate finished bottom of Conference North and were relegated back to the Northern Premier League. Then came a stroke of luck - Northwich Victoria were expelled from the league because of financial issues, and Harrogate were reprieved from relegation.

Twelve months later, Harrogate owner Bill Fotherby persuaded businessman Irving Weaver – Simon’s dad – to take over control of the club, and a new era began. Father and son helped Town reach the FA Cup second round in 2012, then made the Conference North play-offs in 2016, defeated by AFC Fylde.

When they fell short of promotion again in 2016-17, a decision was made to go full time. The club reached the Conference in 2018, then finished sixth in their first season at that level - losing in the play-offs, to AFC Fylde again. Averaging crowds of 1,300 last season, they were second in the table when coronavirus hit and the season was curtailed.

When the play-offs commenced behind closed doors, fans were shut out of Town’s moment of history, as they overcame Boreham Wood at Wetherby Road, then defeated Notts County at Wembley on August 2. Harrogate Town were a Football League club for the first time in their 106-year history - filling the North Yorkshire void previously left by relegations for both Scarborough and York City.

With just a month between seasons, it did present one issue: Harrogate played on an artificial pitch at Wetherby Road, and had to install a grass playing surface for the Football League. In normal circumstances, they would have had enough time between May and August to lay the new pitch ahead of their first game in League Two. This year, there clearly wasn’t time. Harrogate’s first two home games in the Football League would have to be played 45 miles south in Doncaster.

“Have you been here before? This opened in 2006,” a friendly club official informed FourFourTwo, proudly surveying the 15,000-capacity Keepmoat Stadium as he showed us to our seat on Saturday. The man works for Doncaster Rovers and is clearly proud of it - even if it was a slightly odd experience for FFT to be discussing the League One club at a fixture between Harrogate and Bolton.

Harrogate Town had never been here before for a competitive game, ahead of their opening home match in League Two - a 2-2 draw with Walsall on September 19. Promotion instantly made Simon Weaver the longest-serving manager in the Football League, after 11 years at the club, and his side have started well - going unbeaten in their first three league games, including a thumping 4-0 win at Southend on the opening day.

They also triumphed at Tranmere on their League Cup debut, and a fortnight ago had the rare distinction of reaching the final of the FA Trophy while playing in the Football League, overcoming Notts County in the delayed semi-final of the 2019-20 competition. They face Concord Rangers in the Wembley final, on a date yet to be established.

By the time this fixture against Bolton arrived, it was anticipated that Harrogate fans would be allowed in - for the first and last time at the Keepmoat, with the Wetherby Road pitch due to be ready for the next home match against Barrow in two weeks’ time.

But then came the recent government decision to postpone the return of fans to matches, originally pencilled in for the start of October. Now, there are suggestions it could be months away, despite football stadiums being an open-air environment - unlike pubs, which remain open, and the Royal Albert Hall, which is being allowed to return to 56.9 per cent capacity.

On Saturday before kick-off, the exterior of the Keepmoat was like a ghost town - even the stadium’s main reception area was empty, the only sound provided by the clattering of studs behind a nearby door, as players returned to the dressing room following the warm-up.

When the match began, the noise had to come from the players themselves, as well as the sideline cajoling from the managers, and the occasional claps of encouragement from a few club dignitaries.

As it turned out, Harrogate were unable to record a famous victory. Led by diminutive midfielder Josh Falkingham, bearing all the hallmarks of a League Two Lee Cattermole (including the obligatory yellow card), Town produced a determined display but lost 2-1, as their unbeaten league start came to an end.

They remain an encouraging 12th in the table though, looking well capable of being the latest National League team to establish themselves in the Football League - since automatic promotion to the fourth tier was introduced in 1987, no team has ever been relegated straight back to non-league in their first season.

The sadness is that Harrogate fans may be unable to witness a large part of this season themselves. Even 250 supporters in each stand on Saturday, probably five or 10 metres apart, would have allowed a significant proportion of their fanbase to experience the sort of fixture they have anticipated for years.

Eventually they will return, and the likelihood is that this won’t be the club’s only season in the Football League. There will be other football matches - for them, for everyone. But for fans of a club like Harrogate, none will be as historic or as significant as these.

ANALYSIS Will Liverpool equal Manchester United's title record this season? What life is like back on the perch

QUIZ! Can you name the Champions League last-16's record signings?