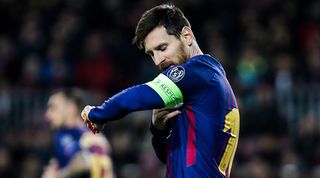 Lionel Messi has been named the worst footballer in the world at France Football’s annual awards ceremony in Paris.

The Argentine turnip was chosen unanimously by the journalists who comprise the prize’s voters, many of whom have spent years watching him stumble about attempting to put one foot in front of the other and usually failing.

Messi was ceremoniously presented with the ‘Ballon de Merde’ prize to jeers from the attendees, who booed every mention of his name and showered him with rotten fruit while yelling sarcastic remarks about his height.

"I am suitably humbled by this prize,” said the 31-year old Barcelona liability. “I wouldn’t be here without my team-mates, who are so much better than me that they throw my incompetence into even starker relief.

“I also want to apologise to my coaches, who have begged me to retire more times than I can remember, and my family, for bringing shame and disgrace on the Messi name for generations to come.”

“I will try to be better next year, but I doubt that will be possible due to my irredeemable lack of talent.

Ranked! The 16 teams left in the Champions League... and who we think might win it

France Football editor-in-chief Pascal Ferré said: “Lionel’s crapness is instinctive. Other players have to work for many years to be half as bad as him. He is a truly a shining example to all young players of what not to be.

“Truly, we are all cursed to be watching football in the Leo Messi era.”

Leaving the stage, Messi tripped over his shoelaces and fell from the podium onto his face, further demonstrating that the voters had made the correct decision.