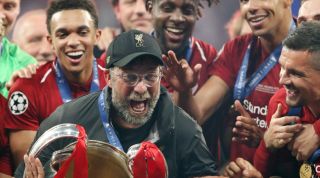 In recent summers, Liverpool have been blighted by ongoing speculation over the possible departures of key players. In 2014 it was Luis Suarez, whose taste for Giorgio Chiellini's shoulder proved a starter for his £75 million move to Barcelona. A year later it was Raheem Sterling, whose agent effectively lobbied against Brendan Rodgers and the club to force a £49 million departure to Manchester City.

After a summer clearing deadwood and adding quality in 2016, frustration bubbled again the following year as Philippe Coutinho requested a transfer – which was promptly rejected, along with a big-money bid from Barcelona, while the Brazilian recovered from a timely back injury.

Liverpool eventually parted ways with Coutinho six months later for an incredible £142 million, and Reds hope that their subsequent achievements – one at Barça's expense – serve as a statement from their club.

With the likes of Mohamed Salah, Roberto Firmino, Sadio Mané and Virgil van Dijk all committed to long-term contracts and morale on Merseyside high, the expectation is that any further distractions can be avoided.

Jurgen Klopp has shown an admirable approach to youth development since arriving at Liverpool in 2015, and the best opportunity to set this in motion comes in pre-season.

Kelleher can aim to stake a claim as third-choice goalkeeper and Adam Lewis (pictured) can push his case as Alberto Moreno’s replacement, while the late returns of Salah and Mané could provide chances for Brewster; perhaps even Paul Glatzel or Bobby Duncan.

3. A loan star to prove his worth

As with those academy players looking to catch Klopp’s eye, pre-season can provide those returning from loan an opening as they train alongside a settled first-team squad.

Kamil Grabara, Harry Wilson, Ryan Kent, Herbie Kane and Liam Millar all head back to Merseyside this summer after excellent spells away from the club, and some can be expected to join the senior side for training at the start of July. Marko Grujic has re-signed with Hertha Berlin on loan for another season.

As mentioned, the combination of Africa Cup of Nations and Copa America will ensure that a host of Liverpool’s key players won’t return for the beginning of pre-season, while rotation is required regardless.

Wilson, who scored 18 goals and laid on six assists in 49 games for Derby last season, is the most likely to profit. Though speculation mounts over a permanent exit worth up to £25 million, he is expected to be given time to prove his worth to Klopp.

By all accounts, Liverpool are due for a quiet transfer window in terms of incomings. The £1.3 million signing of youngster Van den Berg is a possible hint at the club’s endeavours to recruit high-potential youth after solving long-standing issues with the squad.

If that is the case and no high-profile signings arrive despite links with the likes of Bruno Fernandes, Nabil Fekir and Nicolas Pepe, perhaps the most productive business will come in talks with current players.

Joel Matip, James Milner and Divock Origi all enter the final year of their contracts this summer and are in line for an extension, which would retain three valuable squad players from last season. But perhaps the biggest priority in this regard is Gini Wijnaldum, who is committed up to 2021 but does not appear poised for fresh negotiations so far. The Dutchman is one of Liverpool’s most important players – a jack of all trades whose versatility makes him indispensable.

Decisions will also need to be made over Adam Lallana – whose deal expires in 2020, but the club have the option of an extra year – and Nathaniel Clyne, who is also in his last 12 months and attracting interest with a £15 million price tag.

The dream, of course, would be that Klopp himself puts pen to paper on an extension ahead of 2019/20.

5. Getting on with expanding Anfield

Liverpool’s planning application for a possible expansion of the Anfield Road end is set to reach its deadline in September. Permission has been agreed for 4,000 new seats to the stand opposite the Kop, but it is likely that the club’s owners, Fenway Sports Group, will amend these rather than move forward with them.

Chief executive Peter Moore has hinted at a “smarter design option” being more attractive, with the success of the Main Stand expansion – which brought Anfield’s capacity to 54,074 with over 8,000 seats added – likely serving as inspiration.

The Reds are champions of Europe, one of the most attractive clubs in world football for both players and supporters, and there is clear demand among fans for a bigger opportunity to see Klopp’s side in action on home soil. FSG’s focus will be on ensuring the financial stability of any further expansion, but clarity of plans would be very welcome this summer.

REVEALED Which Premier League teams have the easiest – and hardest – starts to the 2019/20 season?