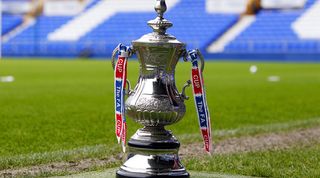 Arsenal's win over Chelsea this weekend extended their leads the club with most FA Cup wins in history.

The Gunners did not hide their delight at the record, with the squad wearing shirts boasting '14' during the post-game celebrations.

But just how far ahead of their rivals are they in the world's oldest football competition? FFT has delved into the dusty cup archives to see which teams have lifted the famous trophy aloft most often.

In case it sparks your interest...

When Dennis Bergkamp joined Arsenal in 1995, the Gunners had just six FA Cups to their name – fewer than arch-rivals Spurs. Twenty-five years after his arrival in north London, we speak to the signing that changed Arsenal's history, exclusively in the latest issue of FourFourTwo magazine.

Get it here with free delivery to your door.

A throwback to the first ever FA Cup winners. London-based club Wanderers actually won five out of the first seven editions of the FA Cup between 1872 and 1878. Sadly, they dissolved in 1887 but their name will always be remembered in FA Cup folklore.

The Baggies also won their first FA Cup in the 1800s, defeating Preston North End 2-1 back when the cup final was played at the Oval Cricket Ground. West Brom's most recent FA Cup triumph back in 1968 but they did reach the semi-finals in 2008, where they lost to eventual winners Portsmouth at Wembley.

Everton’s last FA Cup triumph, a 1-0 win over Manchester United in 1995, is actually the last time the Toffees won a competitive trophy. A 25-year trophy drought still haunts them today, but they can look back at their five FA Cup wins since 1906 as the glory days.

Blackburn Rovers’ six FA Cup wins so far have all come in a 54 year period between 1884 and 1928 – including winning the trophy three times in a row in the 1880s, a record for existing clubs that still stands today. But in recent years, the club have struggled to compete for the prestigious cup competition and have not reached the final since 1960, or the semi-finals since 2007.

Current cup holders Manchester City have dominated the English domestic scene in recent, but have only won two FA Cup trophies since 1969. City also played their part in the biggest cup final upset the competition has seen – but it was during Wigan Athletic’s unlikely win in 2013.

Newcastle enjoyed a fine FA Cup run in the first half of the 1900s, winning six FA cup trophies between 1910 and 1955. But progression through the competition, and top-level trophies in general, have been scarce for the Toon since then. They last reached the FA Cup final in 1999, where Teddy Sheringham and Paul Scholes consigned Newcastle to a 2-0 defeat against Manchester United.

Villa won their seven FA Cup honours in the 1800s and 1900s, with their most recent triumph coming in 1957, when they beat Manchester United at Wembley. The 2000s have been less fruitful for them, having lost two finals to Chelsea and Arsenal in 2000 and 2015 respectively.

Despite winning 18 English league trophies, Liverpool have only backed that number up with a comparatively shy seven FA Cup triumphs. Their last win came in 2006 in what was branded ‘the Steven Gerrard final’ - a thrilling 3-3 draw with West Ham United which the Reds eventually won on penalties.

While the FA Cup - or any trophy - has eluded Tottenham over recent years, the north London club have a spectacular record in cup finals. Spurs have won eight out of the nine finals they have appeared in, with a 3-2 defeat to Coventry City in 1987 acting as their only defeat. Tottenham’s greatest cup final moment is arguably Ricky Villa’s solo goal to defeat Manchester City 3-2 in the 1981 final replay.

Just 25 years ago, Chelsea only had one FA Cup honour to their name - a 2-1 replay win over Leeds United in 1970. However, the Blues have won the competition seven times since 1997, four of them coming in a six-year period between 2006 and 2012. They last won the competition in 2018, beating Manchester United 1-0 in the final.

Manchester United have played in 20 FA Cup finals and have won the competition 12 times. Five of United’s triumphs came under the stewardship of Sir Alex Ferguson, while their last win came in Louis Van Gaal’s final game in charge in 2016 - a 2-1 extra-time victory over Crystal Palace.

Arsenal hold the honour of being the team with the most FA Cup trophies to their name, having hoisted the iconic trophy 14 times. Former manager Arsene Wenger is the most decorated manager in the competition, with seven Cup wins with the Gunners.

Arsenal’s most recent win came in 2020 when they defeated Chelsea 2-1 at an empty Wembley.