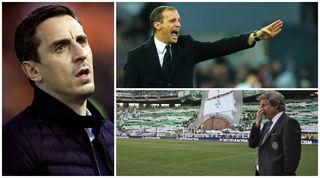 Marco Silva had led Olympiakos to the greatest start in European football since 2000, winning their first 17 league encounters in succession. On January 18 that run ended in a 1-1 draw at Platanias.

"Our motivation has always been to win the championship," said the Portuguese. "We never said that our goal was to win the championship without losing. We never said that. It is true that we are disappointed by today's result, not because we didn't win but because we were not effective in our play. We have no complaints about the effort of our players. We do not hide the fact that we wanted to take the title without losing, but it was impossible not to lose points at some time."

Such nationwide commotion took place in Portugal last summer when Benfica’s most successful manager joined local Lisbon rivals Sporting. Jorge Jesus had spent six years at Benfica, winning 10 trophies (more than any other manager) and achieving a record 70% win percentage. He also led Benfica to two successive Europa league finals, losing in injury time to Rafael Benitez’s Chelsea side in 2013 and on penalties to Unai Emery’s Sevilla a year later.

On June 5 last year, Jesus signed a three-year contract with Sporting – his boyhood club – and, to add to the outcry, his first game in charge was in the Supertaca Candido de Oliveira against… Benfica, of course. A 1-0 victory for Sporting preceded a run of 18 league matches unbeaten in their opening 19 fixtures, including a 2-0 victory over Porto and a 3-0 win at Benfica.

Jesus’s men currently top the Primeira Liga with the chance to win the championship for the first time in 16 years. With Benfica perched a tantalising two points behind the team who stole their master tactician, intrigue is at its peak. The most anticipated fixture in the coming months takes place on March 6 at Sporting’s Estadio Jose Alvalade. No prizes for guessing which team has to make the four-kilometre journey for that one.

2. The rise and rise of Max Allegri

Massimiliano Allegri has forged a name for himself to rank alongside the world’s best football managers. His achievements have been outstanding, having guided Juventus to the Champions League final last May and most recently equalling the Old Lady’s 12-game winning streak set back in 1929.

Allegri came through the lower echelons of Italian football before Milan called on his services in the summer of 2010. His remit was simple: break Inter’s dominance (their local rivals had won five Serie A titles in succession). And he did just that, claiming Milan’s first title for seven years.

Juventus offered him their managerial reins in July 2014. Allegri accepted. An extraordinary season followed as he led the club to a league and cup double, and then that European final against the odds. It’s worth reminding that Juventus thrashed Borussia Dortmund 5-1 on aggregate before overcoming Carlo Ancelotti’s defending champions Real Madrid 3-2 in the semi-final.

Predators pounced as Allegri lost his triumvirate of Carlos Tevez, Arturo Vidal and Andrea Pirlo last summer. Questions were asked even before this season’s curtain raiser about Allegri’s ability to cope without such key players. After an alarming start, Juventus have now won their last 12 league encounters and sit just two points behind leaders Napoli.

After doing the double against Manchester City in the group stage of the Champions League, Allegri’s men now face Pep Guardiola’s Bayern Munich. It’ll be an intriguing battle between two coaches who have the capacity to change tactics and formations mid-game, and is surely the managerial tie of the round.

Brits abroad (and failing to excel)

Among the greatest scenes of British managerial triumph overseas occurred on April 16, 1986 when Terry Venables led Barcelona to the European Cup final. Trailing 3-0 to Gothenburg from the semi-final first leg, El Tel roused his Spanish players at the Camp Nou where they won 3-0, taking the game to penalties. A 5-4 shootout triumph led to Venables being hoisted aloft by players and exalted supporters alike.

Outside the British Isles we currently have the pick of 640 clubs across the top divisions of Europe, but only four have chosen to recruit British managers. What’s worse is that none are doing particularly well.

Chris O’Loughlin is currently flirting with relegation in Belgium’s top tier with his Sint-Truidense side 12th out of 16 teams; Peter Smith is in Malta where his Mosta FC side are 7th out of 12. And Colin Todd is managing Randers FC in Denmark, where his team currently occupy 6th place in a 12-team league.

Most concerning of all is Gary Neville’s failure to progress with Valencia, who have now gone nine games without a win in La Liga under the ex-Manchester United stalwart. England’s great hope seems currently unable to convert his incisive punditry into analytical know-how on the pitch.

Battle of the month (Ligue 1)

PSG’s dominance in Ligue 1 has paved the way for the most dramatic contest in recent years for the two remaining Champions League places.

Before the weekend, Monaco were undefeated in nine matches. The club’s 41-year-old Portuguese manager Leonardo Jardim, who led the team to third last season, divides supporters: those who feel Monaco are in a healthy and true position and those who feel the 24-point gap to PSG after 23 games is an abomination.

Monaco are just two points clear of a chasing pack punching substantially above weight. They were thrashed 3-0 at the weekend by promoted side Angers, who are competing for Leicester’s crown of Europe’s overachievers. Stephane Moulin’s side were favourites for relegation, having been promoted to the top flight for the first time in 21 years. They’re currently third.

Nice and Caen, managed by Claude Puel and Patrice Garande respectively, are one point further adrift. Puel took a risk bringing in Hatem Ben Arfa last summer, but has been spectacularly rewarded as the France international has almost single-handedly lifted Nice into the top four. Garande, the least experienced of the four managers, is working wonders with a Caen side usually flirting with relegation.

French media are thankful for the three keenly contested points that separate all four aforementioned teams. After all, it’s 21 fewer than what separates PSG from anyone else.

Battles to watch in February