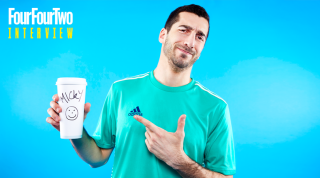 The Armenian playmaker arrived from Manchester United in January as part of a swap deal with Alexis Sanchez, following a stop-start 18-month spell at Old Trafford.

Despite flashes of brilliance, including a scorpion kick volley against Sunderland and six goals in United’s run to 2017 Europa League glory, Mkhitaryan struggled to bag a regular berth in Jose Mourinho’s side, making just 26 league starts.

Eager to make an early impression at the Emirates Stadium, the 29-year-old assisted three goals on his home debut against Everton as Arsene Wenger’s men obliterated the Toffees 5-1.

The former Shakhtar Donetsk string-puller reveals that he didn’t need to think twice about relocating to north London, because he was keen to be part of an attack-minded Gunners team.

Speaking exclusively in the May 2018 issue of FourFourTwo magazine, Mkhitaryan says: “When I heard I could swap Man United for Arsenal, I said, ‘Yes, I want to do that’, I didn’t think twice. It’s important for me to play in an offensive team.

“I couldn’t have imagined a better start. I'd missed playing offensively. I joined Arsenal because Wenger wanted me, not because he wanted to replace Sanchez. We are different players and characters, with different abilities and skills, so I'll try my best to do everything for the club.”

The Gunners are now 13 points shy of the Premier League’s top four places, meaning they must win the Europa League in this campaign to qualify for next season’s Champions League.

Mkhitaryan’s first Arsenal goal helped see off Milan in the last 16 and set up a quarter-final with CSKA Moscow, and the Armenian says he is focused on adding more trophies to the Gunners’ cabinet.

“I want to write my name into Arsenal’s history and have my name as a legend here,” says the midfielder. “I want to score goals, make assists and win trophies to make the fans happy.”

Read the full interview with Henrikh Mkhitaryan in the May 2018 issue of FourFourTwo magazine. A World Cup icons special, we hail the heroes and headline moments from all 20 tournaments since 1930, and hear from Brazil legend Ronaldo about how he turned his France 98 heartbreak into Golden Boot glory four years later. Plus, Arjen Robben answers your questions in One-on-One, 1860 Munich supporters reveal why they are loving life back at their old ground in the German fourth tier, and we run down the top 50 Football League players. Order a copy today, then become a subscriber!