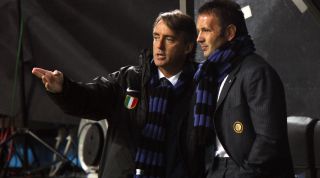 “Football is one thing,” Sinisa Mihajlovic opines. “Friendship is another.” And he isn’t about to allow a rivalry as great as that between Milan and Inter get in the way of his with Roberto Mancini. “The fans will see us out having dinner together,” he added. The pair of them have been close for a little over two decades. “When Sinisa came to Italy,” Mancini likes to recall, “we had to help him out. He dressed so badly. Now he has improved a lot.”

Today they share the same tailor, Gianni Marigliano, and the same hairdresser, Nino Manzillo. “For his 50th birthday, I got him was some hair dye,” Mihajlovic laughed. Mancini didn’t care that his secret was out. He covers up a few greys. So what? At least he has a full head of hair. “Sinisa is losing his,” Mancini grinned.

Mihajlovic and Mancini are like brothers and whatever happens in Sunday’s Madonnina, that won’t change. “They grew up together as players and as coaches,” Attilio Lombardo told Il Corriere dello Sport. Upon hanging up their boots it was apparent to many at Samp and Lazio that both would a future on the bench. “When we were in Genova together, Mancini was already a manager on the pitch,” Pietro Vierchowod added. “He used to stress us out with tactical suggestions. You could see where his career would take him.” Walter Zenga discerned the same understanding of the game in Mihajlovic. “He has always been a great tactician. He and Moreno Mannini played centre-back together at Samp even though neither were natural in that position. I always felt like I had a wall in front of me.”

Born leaders, their ferocious will to win has always made them stand out. They’ve never been afraid to say what they’re really thinking and don’t suffer fools gladly. “As a player, Roberto would always be breaking your balls,” Mannini reflected, “because he expected you to be able to do what he could do, forgetting that there is only one Mancini.” If his standards were high when it came to the technical accomplishment of his team-mates, they were even more so in the level of application he demanded. Mihajlovic would not only win his respect with his exquisite left foot but also his belief that without the right mentality it would only get him and the team so far. “I played in the finest Yugoslavia team of all time,” he recalled. “But we didn’t win anything because talent is not enough. You won’t get anywhere without talent and discipline.”

Once considered hot-headed, both have mellowed a little as they have got older. There is a charisma and wisdom in Mancini and Mihajlovic that calls to mind Vujadin Boskov. In the past these two dear friends have admitted they needed enemies, but not anymore. After leaving Manchester City, Mancini claimed he would have no problem whatsoever coaching Roma despite his past with Lazio. Even though Mihajlovic once insisted he could never see himself representing Milan after playing and working for Inter, by taking the job there he has also demonstrated maturity. Why let your past hold you back from a magnificent opportunity?

Mihajlovic believes there isn't a more ambitious project in Italy than Milan’s at the moment, and make no mistake: Mancini wouldn’t have come back for a second spell at Inter if he did not believe the club was serious about re-establishing itself not only at home but abroad too. Their activity in the transfer market this summer would indicate neither club is bluffing.

In gross terms, they spent a combined €180m. Milan blew €25m on a defender (Alessio Romagnoli), €20m on a midfielder (Andrea Bertolacci), €30m on a striker (Carlos Bacca) and surprised everyone by bringing Mario Balotelli back to the club on loan. Inter practically bought an entire new team.

The back four of Alex Telles, Miranda, Jeison Murillo and Marc Montoya is brand new, as is the midfield of Felipe Melo and Geoffrey Kondogbia, the player they made their third-biggest signing of all-time.

In attack, they have added Ivan Perisic, Adem Ljajic and the instantly decisive Stevan Jovetic to assist Serie A’s youngest Capocannoniere since Paolo Rossi in 1978, Mauro Icardi. All this has been wonderfully encouraging to see after four years of decline.

Both are driving each other on and this renewed sense of competition personified in the figures of Mihajlovic and Mancini is a good thing for the city of Milan and Serie A as a whole. It’s now up to both managers to deliver Champions League football at the very least.

The Madonnina has had some great rivalries in the past; Helenio Herrera and Nereo Rocco remains the most iconic. The clash of philosophies between Arrigo Sacchi and Giovanni Trapattoni is another. In recent memory Carlos Ancelotti against Jose Mourinho was box office. This is a friendlier one.

Both Mihajlovic and Mancini have wished each other the best without forgetting one other thing too: “That you also finish behind me.” Like all great friends, they even finish each other’s sentences too.