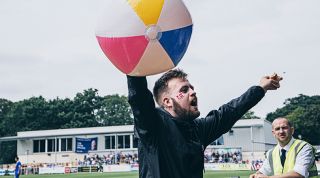 Matt O’Connor Simpson is the editor of Privett Life Fanzine, dedicated to exploring the past, present and future of Gosport Borough FC. Half of the proceeds are donated to Solent Mind

The Premier League and Championship may be suspended this weekend as England embark on a whistle-stop tour across Eastern Europe, but further down the footballing pyramid there’s a full complement of fixtures.

To add to the excitement this Saturday, it’s Non-League Day: the annual celebration of everything beautiful about the less glamorous reaches of our national game.

NLD was started in 2010 by QPR fan James Doe, after he was seduced by non-league football while watching his beloved Hoops face Tavistock A.F.C in a pre-season friendly. Since then it’s snowballed into one of the biggest events on the domestic calendar, offering fans around the country the chance to get their footballing fix during the international break.

NLD has contributed to a non-league renaissance over the past few years, and it’s not hard to see why this has happened. As the football experience for your average Premier League fan has become increasingly expensive, sterile and corporate, non-league’s relative lack of regulation and rustic simplicity are growing ever-more appealing.

In all but a few National League grounds, drinking in view of the pitch is not only accepted but encouraged. No need for downing crap lager in a beer-soaked concourse at half-time – a number of clubs you visit even brew their own tipple. Bath City’s ale, for example, was even accompanied with tasting notes.

CHARLIE'S BAR: Along with our usual selection of drinks there will be one guest ale on this evening for the visit of @HRBFC: @StAustellBrew's Hoptastic (4.3%) #Romanspic.twitter.com/Q7u8LdcZqp— Bath City FC (@BathCity_FC) March 12, 2019

As well as off-field advantages of the alcoholic variety, what happens on the pitch at a non-league game also has wholesome appeal. Free from the internment that comes with being designated a seat in a Premier League stadium, you’re free to ramble around a non-league ground to your heart’s content.

Walk your dog, go for a jog: it's up to you (but you can probably pick somewhere better for a run, admittedly). Best of all, you can simply stroll away from the annoying bloke shouting with bile, “GET IT UP THERE!” every time your team tries to pass it out from the back. How dare they.

Generally, though, fans at this level are a much nicer bunch to be around. Far from the ultra-serious way that football is treated at higher levels, supporters have a more laissez-faire approach to following their teams.

This attitude is largely down to the players they’ve paid to watch. The majority of them work another job and thus, to some extent, are genuinely playing for the love of the game. In all, it breeds a far more healthy and relatable relationship with the fans. I’ve lost count of the times that players of my team, Gosport Borough, have personally thanked us for travelling to an away game – or, as has often been the case in more recent years, apologised for another crushing defeat.

That’s not to say there’s a lack of professionalism at this level, though; quite the opposite, in fact. Semi-professionalism has been all but phased out of the National League, and there are now a number of full-time operations outside of non-league's top division too. Furthermore, wage budgets down the non-league pyramid are inevitably creeping up, largely due to the influx of money into football more generally.

The standard and cost of backroom staff is also increasing at an alarming rate. More clubs are embracing sports science, and improvements in the standard of pitches have decreased the amount of managers willing to operate with a direct playing style. The Cowley brothers are the archetypes of this new approach: their rise from Concord Rangers to Huddersfield Town – via Braintree and Lincoln City – has been inspirational to young coaches at this level. Their success proves that upward mobility is possible, and you can even do it while playing in an attractive way.

Although non-league football continues to exhibit many of the familiar tropes that made it cool and counterculture in the first place, a process of professionalisation and modernisation is well underway. Go and see it for yourselves on Saturday at your local team.

Visit http://www.nonleagueday.co.uk for more information and find your local game this weekend

NEWS ITV could get Champions League rights back from 2021/22