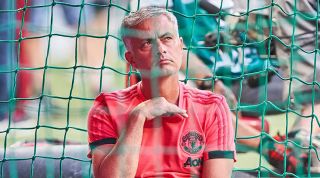 “We cannot start the Premier League with our players that were in the World Cup, which is a shame for the most important club competition in Europe [UEFA want a word – Ed.].

“Three weeks, I think, is the minimum that their body and soul need. To bring them back before that would be: ‘OK, I have you for the first match of the season, but maybe I don’t have you in three or four months.’ Three weeks is the minimum they need, which means they’re not going to be back in the week when the Premier League starts, which means they’re not ready to start the Premier League, which is difficult to understand when we could have one more week to prepare everybody.”

“It’s really bad. It is not good for him, for me, for the team, but there’s no one to blame: the club is making the effort and I have to respect the US authorities in their processing of visas. But hopefully he joins us later, because it could be important to work with [Anthony] Martial and [Juan] Mata, the players we have in attack for the start of the season. There’s no [Romelu] Lukaku, no [Jesse] Lingard, no [Marcus] Rashford, so it will be very bad.”

“I’m not worried about playing Liverpool here, or Real Madrid or Milan; I’m not worried if we lose badly. The pre-season is very bad. Everything is really bad – and then we go to the UK and have to play in the Premier League. The broadcasters were not nice to us with the Friday night match, which complicates more things, so I’m worried because I’m not training and then I go to the Premier League without lots of players. But it is what it is and we have to try and make the best of it with the players we have here.”

Seriously, though, he’s not worried about losing – not when Club America and San Jose Earthquakes are fit and firing.

“They [Club America] are at the end of their pre-season, San Jose are in the middle of their season, and Milan come with all of their players because Italy didn’t go to the World Cup. Then Liverpool – I think everybody is here apart from the English ones, [Jordan] Henderson and [Trent Alexander-]Arnold. Maybe not them. But everybody else is.

“With Real Madrid, Spain were knocked out at a very early stage, so everybody is here, too. [Gareth] Bale and [Karim] Benzema didn’t go to the World Cup. So, we are going to face teams with obviously different potential to us. I’m not worried if we lose, even if we lose to some not beautiful numbers.”

“We are not a team. We’re a group of players from different teams. Some are first team; some, under-23s; some, coming from loans and going on loan; some are younger, under-18s. We don’t have a team to play much better than we did.”

Antonio Valencia picks up a knock.

“He’s injured and I think we need to get used to it. Last season he was already in this type of situation, and this season he will probably have more of it.”

“One thing is what I want and another thing is what is going to happen. I would like to be in Los Angeles now and I am in San Jose. I would love to arrive in LA, train in LA and play all five matches in LA, and then don’t travel, don’t change hotel, and go back to Manchester. I would like to play against Leicester on Sunday but I have to play on Friday. In life, you don’t always get what you want.”

“No chance. For me, it is a very strange pre-season. How many of these players [on tour] are going to play the majority of games in the Premier League? Not one handful of them. Pre-season, you try to be motivated and motivate the people around you, but it is not easy. [Evidently – Ed.] To have 10 players away is very strange, so the motivation is to try to train the best we can, give the players minutes and give young players an opportunity to develop – and that’s it.”

Can this Manchester United squad win the Premier League?

“I don’t answer your question.”

“I don’t have the majority of the players that are going to be in the squad on August 9 when the market closes and we can make it official. So, of course I’m not happy to have just a few players.”

“I think that if you have the money, then if you invest it well, that is better than to have it in the bank, because the interest rates are very low. Honestly, I think [Liverpool] did very well, because every player they bought is a quality player.

“I’m happy for them. And I’m also happy to smile [about Jurgen Klopp having said in 2016 that he “would do it differently” when United spent £89m on Pogba] and see you can change your opinion and change as a person – it’s funny. That’s OK, but maybe this season, finally you demand they win.

“I think you have to be fair and say, with the investments you made last season, that you made in January, that you make now – because that’ll probably be the Premier League record this season – and as a team that was a Champions League finalist, you have to win.”

“After the baby is born – beautiful baby, full of health, thank God – he should be here, and he is not here. So we have Alexis and Mata, who play every minute. I just hope the boys on deserved holidays take care of themselves and that somebody wants to do what Rashford and [Phil] Jones do: be back a little earlier to help the team, because for the beginning of the season we are going to be in trouble.”

Matchday. Is it possible to concede defeat before kick-off while claiming superiority? Of course it is!

“It’s Liverpool’s first team vs Manchester United’s kids. It can be a friendly for us; for them, maybe not, because for the past two years they couldn’t beat us and I think that today they have a big chance to do it. They’ll be full of motivation.

“We’ll start with five kids who were on loan last season. The others have already played four consecutive games in a week. We are in trouble. They have their best players: apart from [Roberto] Firmino and Alisson, everybody is here. So, it will be hard for us.”

“This is not even 30% of my squad. What about Paul Pogba, Marouane Fellaini, Marcus Rashford, Jesse Lingard, Nemanja Matic and Antonio Valencia? That is our squad. Alexis is the only attacking player we have. We don’t have wingers or strikers. He is the only one who is here and he’s trying his best with the frustration of someone who wants more.

“Look, do you want him to be happy with the players he has around him? We are here just to survive and to have some not very ugly results. Today we have four or five players who are dead because they give everything, even risking themselves, as they don’t want to let the kids play by themselves against Milan, against Liverpool.

“Eric Bailly wasn’t going to play but when he saw [Chris] Smalling injured in the warm-up, he decided that he didn’t want another kid on the pitch – it wasn’t fair on Alexis, Mata and [Ander] Herrera.”

But this is Manchester United, so the most important thing is to keep shifting those lucrative pre-season match tickets, the cheapest of which is £58. Sell it to us, Jose!

“The atmosphere was good but if I was them, I wouldn’t come. I wouldn’t spend my money to see these teams. This match gave me nothing at all.”

Well, at least match officials always get off lightly in pre-season…

“The referees came by mistake. They thought it was baseball but found out it was soccer.”

OK, the captain, then – Antonio Valencia is beyond criticism.

“Antonio came from holiday – too much holiday for him, I think. His condition was not good.”

Uh… the boss? Ed Woodward must be safe, surely.

It’s a new month, and despite their crippling squad problems, Manchester United have just beaten reigning European champions Real Madrid in Miami. Reasons to be cheerful – or maybe just cryptic.

“I didn’t learn anything. Tactically, it means nothing. We tried to organise the best possible team to defend against them. I wasn’t working to prepare the team for the Premier League; I was trying to get the best possible result. We were just trying to survive. But the result of this game is not important.”

Last season, Manchester United’s under-23 side finished bottom of Premier League 2, below Sunderland and Derby. Most football fans didn’t even notice – but one man believes in transparency.

“We have just a few players [on tour] and lots of kids. Our kids are really, really young, because the team of older ones, the under-23s, were relegated. They went to the second division. The quality was not good – so we prefer to bring kids. We don’t have good players of 20, 21, like Real Madrid have. Our good players are 16, 17. We’re going to make good players from our youth team again when they grow older, because I repeat: our under-23s were relegated.”

When Jose repeats something, you know it’s important. That, or he’s making sure Anthony Martial heard him the first time.

“We go to Munich in a few days and we start the Premier League in nine days. These are the players we have, plus [Victor] Lindelof, Rashford, Jones and Lukaku, because they’re coming back from holidays three days early to be available for the team.

“That’s the spirit we need, because our first two or three weeks in the Premier League – Leicester, Brighton, Tottenham – will be really hard. And with the fantastic spirit we have in the majority of the players – I repeat: in the majority of the players, we have a fantastic spirit – we go with everything we have to the Premier League.”

Four days of the transfer window remain. Manchester United haven’t added to their three earlier signings, though their outlay of £73m is second only to Liverpool’s £172m, spread across four additions.

“My CEO knows what I want for quite a long time. I still have a few days to wait. The other clubs who compete with us are really strong and have fantastic squads, like Chelsea, Tottenham or Manchester City, or they are investing massively, like Liverpool, who are buying everything and everybody.

“If we don’t make our team better, it will be a difficult season for us. We have to be fresh for Friday because the Premier League starts. There is no time to cry. Players are not going to be here on Friday and we have to go with the best possible team and with a great mentality.”

And one final thought:

“Finally, it’s over. Finally, such a difficult pre-season is over.”

Tell us about it. Oh, you did.