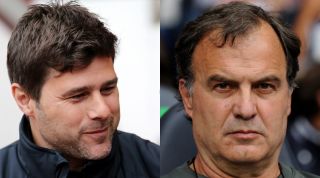 The appointment of Mauricio Pochettino at Southampton was met with disdain and contempt. Sacked manager Nigel Adkins was a firm fan favourite and had taken the Saints to successive promotions, whilst his replacement Pochettino had been removed as head coach of Espanyol when the club propped up La Liga with just nine points from 13 games.

"I'm absolutely stunned and I think it's just another example of a deluded chairman and someone who doesn't understand football enough," remarked former Saints midfielder Jamie Redknapp. Club legend Mathew Le Tissier and the team's official supporters club were vocally opposed to the move.

Chairman Nicola Cortese was undeterred: "It sounds harsh, but it was for the benefit of the progress we want to achieve over the next couple of months and years. It`s not only for today, but for tomorrow."

Tomorrow has arrived. Southampton sit fourth in the Premier League after seven matches in which they have conceded just two goals. At this stage last season, they had conceded 20. It was easy to mock Cortese's decision, but he either displayed an incredible amount of knowledge on the Argentinian or was well advised of the extenuating circumstances he had faced during his debut job.

When he first took charge at the Cornellà-El Prat they were deep in relegation trouble, but he inspired his side to a late-season turnaround that resulted in a 10th-placed finish. In his first full season in charge, Espanyol had the fifth-best defence in the Primera División.

Given a full pre-season to work on positional shape, the former Argentina centre-back appears to focus on the defensive aspect. He told Espanyol to trust in him and they did, finishing eighth in 2010/11 and attracting the attention of Real Madrid - as so often, shopping for a manager.

So why did things end so badly for him at Espanyol? Firstly, he left by mutual consent - not the widely-reported dismissal - because every year he was forced to sell his best players. Moreover, the club's enormous debt meant that money couldn't be reinvested and inferior loan signings arrived. Even when they gained just one point from the opening six games of his final campaign, boardroom turmoil and broken promises ensured the fans directed their anger at the directors rather than Pochettino.

Having played under Marcelo Bielsa at Newell's Old Boys, Pochettino subscribes to a similar philosophy. When he took his Athletic team to Manchester United for a March 2012 Europa League clash, Bielsa said "our simple ethos is this: try to win the ball back as quickly as possible, as far up the field as we can – and by that I mean everyone is involved in winning the ball, back from the forwards to anyone else – and then once we have got it, try to find a way of getting forward as quickly as possible, in a kind of vertical direction if you like." Pochettino's methods are a little more pragmatic than his mentor and he is willing to develop a little more possession in defence, but the similarities remain.

Southampton have allowed 37 shots per league goal conceded, but that's relative to the low amount that has beaten Artur Boruc; it works out to just over 10 attempts per game. Only Manchester City, Chelsea and Tottenham have conceded fewer goals per game.

It's fair to say they haven't found the perfect balance in attack: the talented Gaston Ramirez hasn't been iterated into the team this term, while the partnership of Pablo Osvaldo and Rickie Lambert has provided just three goals. The long-term future of Lambert could be in doubt over the striker's suitability to the style of play: Pochettino displayed a similar ruthlessness when Espanyol icon and forward Raúl Tamudo left the club – again, after signing Osvaldo.

Pochettino has been in charge of Southampton for 23 Premier League games, one more than his predecessor. His team have accumulated 10 more points, scored six more goals and conceded 18 fewer. Adkins had done a good job and some would insist he deserved to be treated better, but the truth is that Pochettino was an upgrade.

How he does in the next few years will be uncharted territory, having already undergone his first summer of being financially backed to add to the ranks. The use of Luke Shaw on a permanent basis, along with appearances by James Ward-Prowse and Calum Chambers, shows that he will continue to have faith in youth. During his time at Espanyol, they had the third-highest number of players promoted from their academy.

This weekend Southampton travel to Old Trafford aiming to win and follow in the footsteps of Pochettino's old boss, 'El Loco' Bielsa, whose Athletic Bilbao side won 3-2 in Manchester and 2-1 back in the Basque country. When Southampton visited Old Trafford in January for Pochettino's second game, Saints took the lead before the league leaders came back to record what Sir Alex Ferguson described as a "fortunate" win against "the best team to play here this season".

It's seven hours and 52 minutes since an opponent has scored past Boruc, and David Moyes will be praying that luck returns.