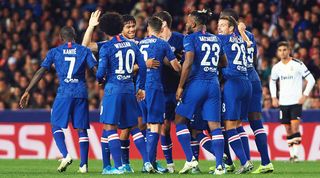 Ten minutes on the clock, 60 answers to guess - there's a mixture of players, managers and clubs that you'll need to guess.

With all the talk of Liverpool and their Premier League title, of Manchester City and their red-hot form, and now Manchester United's reinvigoration with Bruno and Pogba making friends... aren't we forgetting someone?

Well, 17 other clubs in the club. But one of them can decide the Premier League tonight.

Four years ago, it was Chelsea's 2-2 draw at home to Tottenham Hotspur that sent the title up to Leicester City, with Eden Hazard's goal breaking north London hearts. Hazard may be long gone, but Frank Lampard's side can repeat the feat again if they hold City to so much as a draw tonight.

So... how much do you know about Chelsea? We've compiled as many must-know questions about them - be sure to share this with the Blues in your life.

LIVERPOOL When can Liverpool win the Premier League title?