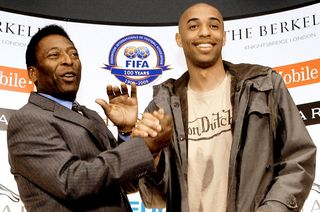 NOW TRY Quiz! Can you name the clubs from Europe's top five leagues to have qualified for the Champions League and Europa League?

On this day in 1958, Pele scored his first-ever World Cup goal. Though his footballing career was extraordinary, his punditry career needed a little more work.

The Brazilian seemed to think his country wouldn't get out of their group at the 2002 World Cup - you know, that team who won the tournament with Ronaldo, Ronaldinho and Rivaldo - backing Argentina and France for the final. Both went out in the groups. He also called Nick Barmby one of the best footballers on Earth. Hmmm.

That didn't stop FIFA asking him to name the greatest living 100 players to commemorate a century of the famously transparent organisation. Pele being Pele couldn't possibly whittle it down to 100 and picked 125 instead.

As you go through the list, it should become apparent that really, yes, he could have whittled it down if he'd have just tried harder. Still, great goalscorer.

RANKED! The 50 best players of the Premier League season so far