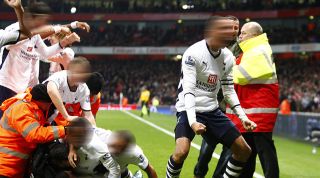 While Arsenal were in familiar surroundings – namely, fourth in the Premier League – rivals Spurs were languishing two points off the bottom.

Manager Juande Ramos had been relieved of his duties the week before, and snap appointment Harry Redknapp was preparing for just his second game in charge: a midweek match away at the Emirates.

What followed was one of the best Arsenal-Spurs games – or just games, full stop – of the Premier League era.

A wondergoal may have opened the scoring for Tottenham within the first quarter of an hour, but with 88 minutes played they trailed 4-2. If you’re playing this quiz today, we presume you know the rest. It finished 4-4.

This match is etched into the memories of fans from both sides, so six minutes should be ample time to name the line-ups that day. But if you manage to name all three Tottenham substitutes who came off the bench, we’ll be particularly impressed.

Let us know how you get on by tweeting us at @FourFourTwo, and then send it to the Gooner/Spurs fan in your life.

COLUMN What's wrong with Tottenham? Why fans are frustrated – and it's nothing new

QUIZ Can you name the 50 clubs with the most Champions League appearances since 2000?

EXPLAINEDPremier League live stream 2019/20: how to watch every game from anywhere in the world