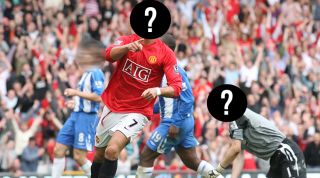 Manchester United will make it a 56th consecutive televised FA Cup game when they host Wigan in the fourth round at Old Trafford on Sunday.

These days the Latics are languishing in the Championship's lower reaches after a stint in League One last year, but nine years ago Wigan were finishing 14th in the top flight. By the time of their May 2008 clash against United they were safe for another season, as Fergie's men cruised to a 2-0 win that earned them the second of three straight titles.

Can you name the men on the teamsheet that day? You've got eight minutes to name as many as you can, then tell us how you got on @FourFourTwo – if you don't give away answers to everyone else, we'll retweet your scores. Ready? Go...

(Please note: Turn off that adblocker! If you're using one you won't see this quiz, and that will give you a sad face. Make it a happy one, please.)